BLOG: In Remembrance of January 6th: Accountability Work in Progress 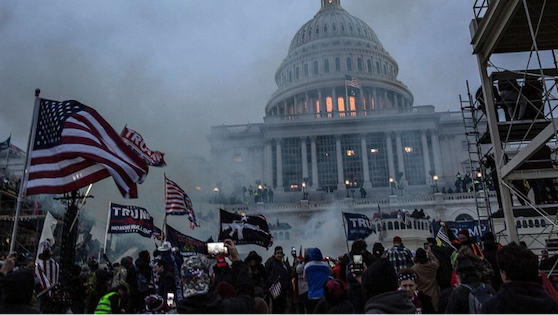 Today is January 6th, the anniversary of one of the darkest days in our democracy’s history—a day when violent insurrectionists stormed the U.S. Capitol building to stop Congress from affirming the nation’s 2020 election results. But today it is important not simply to look back at what happened then; we must also look forward to ensure that our democracy and the peaceful transition of power is never disrupted again.

Chief among these efforts has been the work of the January 6th Select Committee, which issued its Final Report last month. The Report is the culmination of nearly two years of meticulous information collection—information and evidence that leaves little doubt that Donald Trump and a number of cohorts engaged in a criminal conspiracy to thwart the will of American voters and overturn the results of the 2020 election. At this moment, we’d like to recognize the work that has been done so far to safeguard our democracy, and what lies ahead in the effort to ensure January 6th accountability.

Litigation Efforts in Support of the Select Committee

The Select Committee’s investigation was supported by litigation efforts to help ensure that it had access to key documents. We at the Constitutional Accountability Center are proud to have played a role in those efforts, filing multiple amicus curiae briefs in Trump v. Thompson, a dispute over whether the National Archives should release presidential records that the Select Committee was seeking as part of its investigation. In a Presidential Records Act (PRA) request, the Committee asked the National Archives to hand over certain White House documents relating to the events of January 6th and Trump’s communications with other high-level officials over claims of election fraud. The former president went to court to block these records from being released, alleging that the Committee’s request for records was invalid and that his assertion of executive privilege should prevent their release.

CAC filed briefs in this case on behalf of former Department of Justice officials who served in Republican administrations; those briefs argued that the Committee was entitled to the documents under the PRA and that Trump’s claim of executive privilege should fail. Enacted in the wake of the Watergate scandal and the Nixon Administration’s attempt to limit congressional access to presidential papers, the PRA established that the public is entitled to the eventual disclosure of presidential records and set forth a comprehensive framework for doing so. As our briefs highlighted, the scenario that led to the enactment of the PRA is remarkably similar to the dispute in this case: a former president attempting to unilaterally withhold documents relevant to a legitimate congressional investigation. Our briefs also explained that the Committee’s request for documents should not be withheld on grounds of executive privilege. While former presidents may retain some ability to assert privilege, the Supreme Court has made clear that executive privilege does not protect former presidents in the same way as sitting presidents because the incumbent president is in the best position to decide when assertions of executive privilege are warranted. Here, President Biden did not assert the privilege, recognizing that Congress had a compelling need for the documents “in service of its legislative functions.”

After losing in both lower courts, Trump filed an emergency request with the U.S. Supreme Court to block the release of the records. The Court ultimately rejected his claim, clearing the way for the National Archives to turn over the materials. The Committee received over 700 documents pertaining to the events leading up to January 6th, including memos, briefings, letters, and handwritten notes from the White House that provided crucial evidence used in the Committee’s Final Report. The case not only provided evidence that supports the Committee’s criminal prosecution referrals, but also serves as an important reminder that Trump cannot always hide behind executive privilege during legitimate investigations.

While the Committee’s Final Report and its criminal prosecution referrals are an important step toward accountability, many legal challenges remain to be settled before justice is served, including one brought by law enforcement officers who have yet to see any redress for the injuries they sustained while defending the Capitol. CAC continues to work to ensure that those responsible for January 6th will also be held accountable for these wrongs.

In cases consolidated before the D.C. Circuit under the name Blassingame v. Trump, two Capitol Police officers and eleven members of Congress sued former President Trump for damages for his role in the attack on the U.S. Capitol which caused them to suffer both physical and emotional injuries. Trump, however, claims that he is entitled to absolute presidential immunity and therefore cannot be held liable for the events on and leading up to January 6th. CAC filed multiple amicus curiae briefs in the cases on behalf of leading constitutional law scholars with expertise in executive immunity and separation of powers principles.

Our briefs explain that presidents are entitled to immunity for their official conduct because such immunity preserves the separation of powers and ensures the proper functioning of government. Trump, however, seeks to invoke the immunity doctrine as an absolute shield from damages liability for unofficial conduct that allegedly sought to serve his own private interests by forcibly interfering with the constitutionally mandated functions of Congress. Given his flagrant attempt to violently disrupt the separation of powers, it would be particularly inappropriate to allow Trump to hide behind the shield of an immunity intended to preserve the separation of powers.

Insurrectionists are Unfit for Office

In addition to criminal and civil liability, the Constitution itself provides an additional penalty for the officials who betrayed their oath to protect our Constitution: Section Three of the Fourteenth Amendment disqualifies from any state or federal office anyone who has taken an oath to protect the Constitution and then “engaged in insurrection or rebellion against the same, or g[ave] aid or comfort to the enemies thereof.”

CAC has supported litigation efforts to disqualify members of Congress who engaged in the January 6th insurrection from holding future office.

Among those lawmakers who helped plan and support the attack on January 6th was Representative Madison Cawthorn of North Carolina. Cawthorn participated in dozens of planning meetings ahead of the January 6th rally, publicly promoted the event on social media, and just an hour before Trump implored his supporters to march to the Capitol, Cawthorn rallied the crowd for having “some fight in it.” Based on his participation in these events, several registered North Carolina voters challenged Cawthorn’s candidacy, alleging that he was disqualified from holding office under Section Three of the Fourteenth Amendment.

In response, Cawthorn filed suit in federal court, claiming that a statute passed in 1872 immunized him from Section Three disqualification. That act removed Section Three disqualification from certain former Confederates, but Cawthorn argued that it also gave amnesty to all potential future insurrectionists. CAC filed an amicus curiae brief explaining that this is wrong: the text and history of the 1872 Amnesty Act show that it was passed to grant immunity retrospectively to certain former Confederates, not to grant immunity prospectively to all future insurrectionists. Our brief demonstrated that Cawthorn’s efforts to evade accountability for his role in the January 6 attack is at odds with the text and history of the statute on which he relied. And his argument, if it were accepted, would mean that Section Three of the Fourteenth Amendment was currently without effect.

The U.S. Court of Appeals for the Fourth Circuit agreed, recognizing that the 1872 Act was not meant to remove disqualification for future officeholders such as Cawthorn. It also sends an important message that others who face potential disqualification cannot evade accountability by relying on the 1872 Amnesty Act and other Confederate-era amnesty legislation.

After all that has come to light in the past two years, it is certainly ironic that these public officials would shamelessly invoke a statute designed to grant amnesty to former Confederates. As the Select Committee’s Report poignantly highlights, our Republic has not faced such an existential threat since Southern secession in 1861. It is thus fitting that the Fourteenth Amendment’s disqualification clause was used to remove an official for the first time since the Civil War era in a recent case in New Mexico where the Otero County Commissioner was barred from holding office because of his participation in the January 6th attack.

These cases, along with the evidence brought forth by the Select Committee, provide support for efforts to have the candidacies of Trump and his allies challenged in future elections. By laying out evidence relating to some of the public officials involved in the seditious conspiracy to overturn our election and who organized and engaged in insurrection, the Final Report provides strong support for Section 3 disqualification moving forward. In fact, the Select Committee’s criminal referrals include investigating the ex-president for “inciting an insurrection,” the disqualification clause in the Fourteenth Amendment.

The Select Committee’s Report makes abundantly clear that Donald Trump and his associates are responsible for the attack on January 6th and pose an ongoing threat to our democracy. So as the Committee’s work ends, our work continues in holding accountable those responsible for the attack. Whether they are members of Congress or a former president, no one is above the law.