Failing to Affirm Brown v. Board of Education: Injudicious

While there may be legitimate disagreements between conservatives and liberals in terms of how each views the Constitution, failing to affirm that a ruling like Brown was correctly decided—and by extension, willfully ignoring the Fourteenth Amendment’s guarantee of equality—should not count as one of them. And such a misunderstanding of our nation’s founding document should be disqualifying for a lifetime position on the federal bench. 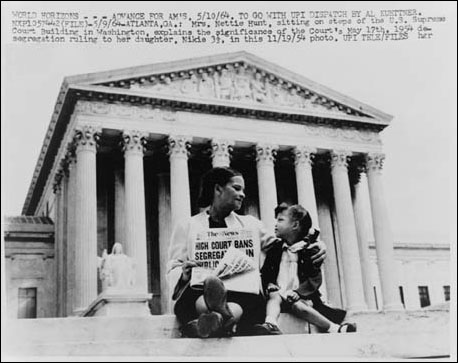 On May 3, 2019, the Trump Administration confirmed its 100th judicial nominee to a lifetime appointment on the federal bench. Whether at the district court level, circuit court level, or the Supreme Court, these judges will make important decisions on any range of issues affecting the lives of all Americans—from voting rights, to health care, to the environment, and more.

A fair, impartial, and independent judiciary is essential to our democracy and constitutional structure of checks and balances. Unfortunately, many of President Trump’s judicial nominees threaten to undermine this fundamental principle. Deviating from the Founders’ vision of a judiciary independent from political sentiment, President Trump has utilized several litmus tests in selecting his judicial nominees. But this may not come as a complete surprise, as Trump campaigned aggressively in 2016 on nominating judges who would overturn Roe v. Wade, undermine the Affordable Care Act, and expand gun rights.

What is surprising, however, is just how steadfast many of these nominees have revealed themselves to be against committing themselves to the guarantee of racial equality promised by the Fourteenth Amendment. In their confirmation hearings, a staggering 27 refused to say whether Brown v. Board of Education­—the landmark case that struck down racial segregation in public education—was correctly decided. This truly is extraordinary. Normally, judicial nominees would seize the opportunity to publicly affirm Brown in their confirmation hearings, as was standard during previous administrations, regardless of political party.

Even Supreme Court Justice Samuel Alito, who no one would regard as a liberal, described Brown during his confirmation hearing as “one of the greatest, if not the single greatest thing that the Supreme Court of the United States has ever done.” It is downright shameful that as we observe the 65th anniversary of the Brown decision today, rather than affirming Brown and the promise of equality it represents, so many of President Trump’s nominees have instead chosen to tacitly undermine its very validity.

Whether on the campaign trail or in office, President Trump has made clear that he and his advisers select federal judges by applying litmus tests for promised outcomes that ignore or undermine fundamental constitutional principles that all in America hold dear.

That raises a challenge for candidates challenging President Trump in the 2020 presidential election: How should they approach the critically important question of how to choose judicial nominees? There is a principled alternative to President Trump’s approach. Future presidents should only nominate individuals who demonstrate fidelity to the text, history, and values of the whole Constitution, which together guarantee equality, inclusion, and fairness to all in America. Contrary to what many conservatives will lead you to believe, our Constitution—in its most vital respects—is a progressive document.

Let’s step back a moment. At a time when monarchies were the norm, our Constitution began with the almost unthinkable words “We the People.” It established three co-equal branches of government, a system of checks and balances to better secure liberty, and a federal government with broad powers to solve national problems. Over the course of our country’s history, “We the People” have fixed critical flaws in that original document, amending the Constitution 27 times—outlawing chattel slavery, promising equality for all, and expanding and protecting the right to vote—bringing us closer to realizing our nation’s ideals voiced in our Declaration of Independence. When the Supreme Court outlawed segregation in 1954, our nation took a giant step along the arc of our Constitution’s progress. Here in 2019, federal judges must respect this history, affirming landmark rulings like Brown—and critical provisions like the Fourteenth Amendment on which it is based—that point us toward the “more perfect Union” promised in the Preamble.

The reason for nominees to affirm the ruling in Brown v. Board of Education is not to pass what conservatives might incorrectly malign as a liberal litmus test; rather, the reason for nominees to affirm Brown v. Board of Education is to demonstrate that they properly understand, and are faithful to, one of the key provisions of the Constitution. While there may be legitimate disagreements between conservatives and liberals in terms of how each views the Constitution, failing to affirm that a ruling like Brown was correctly decided—and by extension, willfully ignoring the Fourteenth Amendment’s guarantee of equality—should not count as one of them. And such a misunderstanding of our nation’s founding document should be disqualifying for a lifetime position on the federal bench.

Empirical SCOTUS: About this term: OT 2019

SCOTUSblog/Empirical SCOTUS
“So far, Brianne Gorod of the Constitutional Accountability Center is counsel of record on the...
By: Brianne J. Gorod, By Adam Feldman
Federal Courts and Nominations
January 29, 2020

How the Supreme Court Contributed to Growing Inequality

The American Prospect
“Progressive groups such as the Constitutional Accountability Center have claimed originalism for the left, accusing...
Federal Courts and Nominations
January 16, 2020

EVENT: Are We All Textualists and Originalists Now?

ABA Journal
The U.S. Supreme Court has multiple high-profile cases on its docket this term, including cases...
Federal Courts and Nominations
December 18, 2019

Sphere
In general, are most laws and regulations constitutional? Should the courts do more to enforce...
Federal Courts and Nominations
December 9, 2019

How Will the Justices Rule?