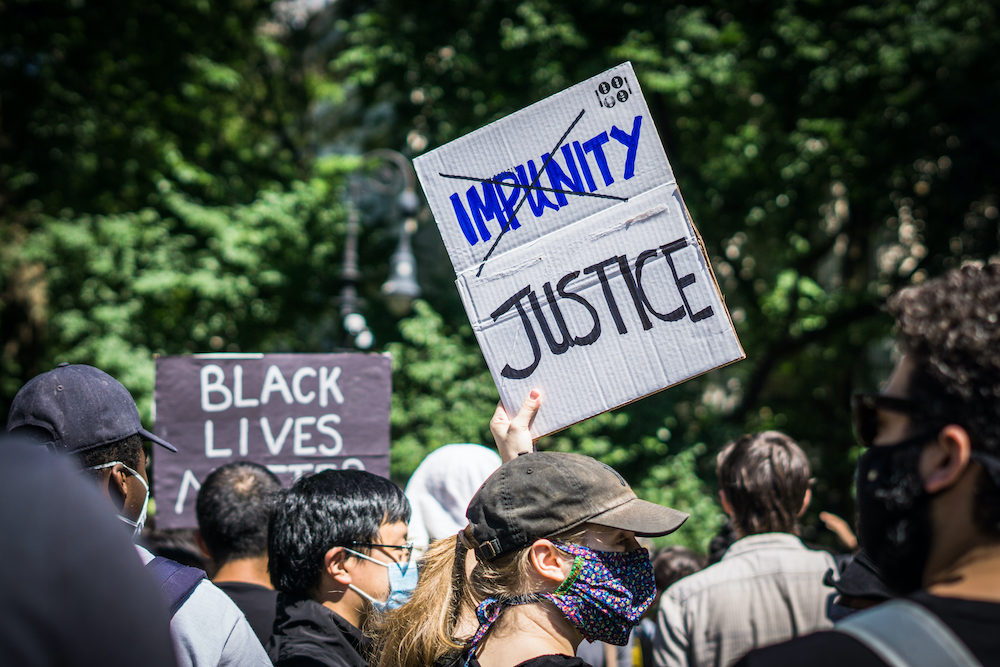 The murder of George Floyd brought America’s policing crisis to the forefront of the nation’s attention once again. And now, more than two years later, the issue of police violence continues to rage on. In the past year alone, over a thousand Americans have been shot and killed at the hands of law enforcement. Perpetual police violence isn’t just the result of a few bad cops; it is also the result of a systemic failure of our legal system to hold police accountable when they engage in unlawful conduct. While there are laws in place that should result in accountability, courts have created artificial barriers to their application that far too often stand in the way of justice for victims of police brutality.

Among the laws that promise accountability is 42 U.S.C. § 1983, a statute that allows people to sue for money damages when state and local officials violate their constitutional rights. Enacted in the aftermath of the Civil War to combat Southern campaigns of violence against formerly enslaved people, Section 1983 plays a critically important role in the effort to deter police misconduct. Indeed, this is the law that allows individuals to sue law enforcement for excessive uses of force, unlawful arrests, illegal searches and seizures, and other constitutional violations.

However, the accountability Section 1983 seeks to achieve remains elusive. With the Supreme Court leading the way, courts have embraced a host of legal doctrines that make it far too difficult for victims to seek redress under Section 1983. Among the most pernicious of these judge-made doctrines is “qualified immunity,” which enables law enforcement to have these suits dismissed as long as their conduct does not violate “clearly established statutory or constitutional rights.” In practice, victims of police misconduct often cannot proceed with their suits unless they can point to a prior decision establishing that precisely the same misconduct violates the law.

CAC has sought to ensure that qualified immunity does not stand in the way of those seeking to vindicate their rights, filing amicus curiae briefs in a variety of cases in the Supreme Court and in the federal courts of appeals.

Cope v. Cogdill is one recent case in which CAC filed a brief in the Supreme Court. In that case, pretrial detainee Derrek Monroe wrapped a 30-inch telephone cord around his neck and hung himself in his jail cell. The jailer on duty that morning did not call 911, nor did he attempt to render aid. Instead, he called his supervisors and watched as Monroe strangled himself. By the time an ambulance was finally called, it was too late, and Monroe died the next day as a result. Monroe’s mother, Patsy Cope, filed suit under Section 1983, asserting that the jail officials violated Monroe’s Fourteenth Amendment Due Process rights, including the right to be protected from a known risk of suicide while being held in police custody. A divided panel for the Fifth Circuit granted qualified immunity to the jail officials. Although the majority agreed that Monroe’s Due Process rights were violated, it concluded that the officials did not have fair notice that their actions were unlawful because no factually identical case established the unconstitutionality of their conduct. Cope asked the Supreme Court to review that decision, and CAC filed an amicus brief in support of the petition, urging the Court to hear the case and take this opportunity to eliminate, or at least significantly reform, its qualified immunity doctrine.

As our brief explained, qualified immunity is at odds with the text and history of Section 1983. The plain text of Section 1983 says nothing about immunities, but rather subjects officials to liability whenever they violate someone’s constitutional rights. While proponents of qualified immunity argue that Congress intended Section 1983 to incorporate certain well-known immunities that were recognized by the common law at the time, today’s qualified immunity rules have no relationship to those historically established standards. Thus, by refusing to apply the statute Congress passed to ensure enforcement of our constitutional rights in a manner consistent with that statute’s text and history, the courts have needlessly tied their own hands in administering justice.

On top of that, the Fifth Circuit’s decision in this case wrongly prevented state officials from being held accountable even when they knowingly violated a person’s constitutional rights. Fifth Circuit precedent clearly established that officers who place a detainee exhibiting risk of suicide in conditions that they know to be inadequate are not entitled to qualified immunity. However, the Fifth Circuit held that those cases were not applicable because they concerned detainees who died by suicide using bedding, not phone cords. Under this reasoning, when a prisoner dies by suicide, there must be binding precedent involving the precise tool used by the prisoner before jail officials can be held accountable for their actions. By requiring a factually identical case to show that the officers knew that their conduct was unlawful, the Fifth Circuit constructed a nearly impenetrable barrier to liability.

In June 2022, the Supreme Court denied the petition to hear the case. Justice Sotomayor wrote an opinion dissenting from the Court’s denial, explaining that the Fifth Circuit erroneously granted qualified immunity and that, given the “uniquely troubling facts” of the case, she would have summarily reversed the Fifth Circuit’s decision. The Court’s refusal to do so is deeply disappointing—and illustrates why it is so important that efforts to cabin qualified immunity not be limited to the Supreme Court.

In fact, CAC has filed a number of briefs in the federal courts of appeals to help combat qualified immunity and support efforts to hold police and other state officials accountable when they violate constitutional rights.

In the case Torres v. Madrid, for example, Roxanne Torres was in her car when two plainclothes police officers approached her. Thinking the officers were carjackers, Torres began to drive away, at which point the officers shot her twice in the back to stop her. Torres sued the officers under Section 1983, alleging that the officers’ use of excessive force violated her Fourth Amendment right against unreasonable seizures. The case eventually made it to the Supreme Court, which held that the officers had “seized” Torres when they shot her. Despite Torres’ win in the Supreme Court, the officers were granted qualified immunity when the case made it back to district court. Torres subsequently appealed that decision to the Tenth Circuit, and CAC filed an amicus brief in support of Torres, explaining why qualified immunity should be no bar to the suit against the officers.

Our brief explained that because qualified immunity is at odds with the text and history of Section 1983, courts should be especially vigilant in observing the limits that the Supreme Court has placed on the application of this doctrine. It also demonstrated that the district court misapplied the doctrine of qualified immunity in the case. The district court held that the officers’ conduct did not violate clearly established law because the question of whether a Fourth Amendment “seizure” occurs when the police shoot someone who temporarily eludes capture was unsettled at the time they shot Torres. But that analysis is fundamentally flawed because it relies on a fact not known at the time of the shooting: that Torres would be able to escape their use of deadly force. Instead, the proper inquiry should have been whether the officers had fair warning that using deadly force was excessive in situations like the one the officers confronted when they shot Torres. Because binding precedent clearly established that officers may not use deadly force against a suspect who poses no immediate threat of harm to the officers or to others, the officers should not have been granted qualified immunity. The Tenth Circuit has not yet issued a decision in this case.

And in J.W. v. Paley, a special education student in Texas was tased by a school police officer while trying to leave the building to cool down. The officer continued to tase the student even after he fell to the ground and had stopped moving. The incident caused the student to suffer from intense anxiety and to miss several months of school. The students’ parents sued for damages under Section 1983, asserting that the officer’s use of the taser constituted excessive force in violation of the Fourth Amendment. Although Supreme Court precedent makes clear that public school students are protected from excessive force and other unreasonable seizures at the hands of school officials, a panel of the Fifth Circuit Court of Appeals inexplicably held that precedent did not clearly establish such a right and granted the officer qualified immunity. CAC subsequently filed an amicus brief urging the full Fifth Circuit to rehear the case and reconsider the panel’s flawed ruling.

As our brief explained, officers run afoul of the Fourth Amendment if they use “excessive force,” or more force than is reasonably necessary, to seize an individual. Supreme Court precedent has long made clear that school officials are subject to Fourth Amendment limits, and the Fifth Circuit has held that students have a Fourth Amendment right to be free from excessive force by school officials. The police officer in this case clearly crossed that line when he repeatedly and horrifically tased a special education student who was already subdued. Thus, even under the flawed doctrine of qualified immunity, the officer’s actions were indefensible because there was clear prior precedent giving him fair notice that his conduct violated the law.

In November 2021, the Fifth Circuit refused to rehear the case, ultimately leaving in place a decision that, as a practical matter, means school children in that court’s jurisdiction may be deprived of their constitutional protection from excessive force by law enforcement while in school.

It’s a sobering reminder that at a time when police violence remains persistent, many of our federal courts continue to ignore the cry for accountability, protecting the police rather than the rights guaranteed by our Constitution. It’s long past time for that to stop—and for courts to start respecting the text and history of Section 1983 and our Constitution.

BLOG: This Term, the Supreme Court Has the Opportunity to Vindicate the Original Meaning of the Sixth Amendment Jury Trial Right

Ask a random person on the street how many people make up a jury and...
By: Charlotte Schwartz
Criminal Justice
U.S. Supreme Court

In Khorrami v. Arizona, the Supreme Court is being asked to consider whether the Sixth Amendment requires a 12-person jury for a felony conviction.
Criminal Justice
June 23, 2022