The Case Against a Presidential Self-Pardon 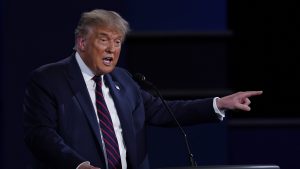 Last month, President Trump used the presidential pardon power enshrined in the Constitution to pardon Roger Stone, George Papadopoulos, and Paul Manafort, all of whom were convicted as part of the Mueller investigation.  And now there is talk that the President has raised the prospect of pardoning himself—a particularly troubling prospect in light of last week’s attempted coup at the Capitol and the President’s role in inciting it.  Fortunately for those who believe in the rule of law and presidential accountability, such an attempt would be invalid because, as constitutional text and history make clear, the President cannot pardon himself.

The President’s pardon power is mentioned once in the Constitution.  Article II, Section II states that the President “shall have Power to grant Reprieves and Pardons for Offenses against the United States, except in Cases of Impeachment.”  A presidential pardon, when granted, can protect the recipient from prosecution for all federal crimes that have been committed in the past, even if the individual has not yet been charged with those crimes.

This pardon power did not originate with the Framers.  Instead, its roots lie in Great Britain, where as far back as the seventh century the King was imbued with a “royal prerogative of mercy” to grant pardons.  Drawing on that history, Charles Pinckney introduced a proposal to give the President this power, and in The Federalist No. 74, Alexander Hamilton defended the practice, explaining that pardons would allow the President to correct the inevitable injustice of the judicial system.  As Hamilton put it, “The criminal code of every country partakes so much of necessary severity that without an easy access to exceptions in favor of unfortunate guilt, justice would wear a countenance too sanguinary and cruel.”  In other words, the principal purpose of the pardon power was to ensure that the President enjoyed a means of addressing the inevitable unfairness that can occur in the administration of criminal justice systems.

But as President Trump considers how to use this power in his few remaining days in office, he doesn’t appear to be focused on those who might have been subject to unfairness in the criminal justice system.  Instead, he is thinking about himself—and how he can use the power to ensure that he can’t be subject to federal prosecution after he leaves office.  Fortunately for those who believe in the rule of law, that’s not the way the pardon power works.

To start, the very word “pardon” implies a “bilateral” action, one that requires two people—the person granting the pardon and the person receiving it.  Founding-era dictionaries make this clear.  For example, the 1784 edition of Samuel Johnson’s dictionary defines pardon as “[f]orgiveness of an offender” and the 1788 edition of The Royal Standard English Dictionary defines a pardoner as one “who forgives another.”  Likewise, the clause’s use of the word “grant” also connotes an action involving two people.  Founding-era dictionaries define the word “grant” to mean “the act of giving or bestowing a thing which cannot be claimed as a right,” and the Royal Dictionary defines “grant” as “a thing granted, a gift, concession” and “to admit, allow, bestow.”  A person gives something to someone else.  Thus, constitutional text suggests that while the President has broad power to pardon others, he cannot pardon himself.

And a fundamental precept of our system of government confirms that this is the best reading of the text because the contrary reading would undermine the important principal that no one, including the President, is above the law.  When the Framers created a single chief executive, they imbued that office with significant powers, but they also made clear that this new President was not a king.  The President is bound by the laws, just like everyone else.  This principle is reflected in the fact that the President can be impeached and removed from office by Congress, and he can eventually be prosecuted for any crimes he commits while in office.  Yet if the President can pardon himself for any crimes he commits, he can literally put himself above the law, able to commit crimes with impunity while holding the nation’s highest office.

To be sure, the President might be removed from office for some crimes, but not all violations of the criminal code necessarily qualify as impeachable offenses, and in any event, impeachment is not a substitute for criminal prosecution.  Article I of the Constitution makes this clear: “the Party convicted [in the Senate] shall nevertheless be liable and subject to Indictment, Trial, Judgement and Punishment, according to Law.”  While individuals can be pardoned for criminal offenses even after they have been impeached, allowing the President to self-pardon is different because it would allow the President to do what no one else in the country can do—be a judge in his or her own case.  If self-pardons were permissible, the President could decide unilaterally that he should be able to avoid accountability in the criminal justice system, no matter how egregious the crimes he may have committed while in office.

Significantly, while the courts have never been called upon to decide the constitutionality of a self-pardon because no President has ever tried to pardon himself, the Department of Justice’s Office of Legal Counsel has considered the issue and concluded that a presidential self-pardon is likely illegal,  explaining that “[u]nder the fundamental rule that no one may be a judge in his own case, the President cannot pardon himself.”

Last week’s events—President Trump’s incitement of an attempted coup at the Capitol—underscore how critical presidential accountability is.  Indeed, especially in the waning days of an administration, the prospect of criminal liability may be a much greater deterrent than impeachment for a President willing to engage in illegal action to try to hold onto to the reins of power.

President Trump may have thought that he could use the presidential pardon power to ensure he wouldn’t be charged for any crimes he may have committed, but he is wrong.  No one is above the law—and that includes the President.

Slate
The case concerns an attempt to expand a part of the Constitution that James Madison...
By: Dayna Zolle
Rule of Law
March 22, 2021

OP-ED: Can Mitt Romney do more to protect us from Donald Trump?

Salt Lake Tribune
Utah senator could lead a move to invoke the 14th Amendment to ban Trump from...
By: Elizabeth B. Wydra
Rule of Law
February 12, 2021

Originalism. It isn’t just for conservatives anymore. (Spoiler alert: It never was.) Progressives are reclaiming...
By: Elizabeth B. Wydra