RADIO (BBC): How the Supreme Court is reshaping the US 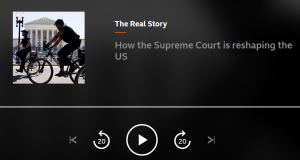 Abortion, environmental protections and gun ownership rights are among the controversial topics the US Supreme Court has ruled on over recent weeks. The highest court in the land has the final say on interpreting laws and deciding what’s constitutional and what isn’t. Now – with a clear conservative majority at the helm – the court’s move to overturn the landmark 1973 ruling guaranteeing abortion rights across the country (Roe v. Wade) signals it’s willing to re-visit previous judgments many had considered ‘settled law’. Campaigners fear past decisions on other subjects, such as gay marriage, the right to contraception and even the way elections are run, may now also be overturned. So, what is the role of the Supreme Court within the United States’ system of government and is it changing? How will its rulings impact politics federally and in individual states? And is the system set up by America’s founding fathers working as designed, or is political polarisation undermining the very principles it was built around?

Elizabeth Wydra – President of the Constitutional Accountability Center, a think tank based in Washington DC

Friends of the Court

National Law Journal (Supreme Court Brief)
Adam Feldman, the creator of Empirical SCOTUS, had a narrower focus than Epstein-Gulati. Instead of...
Federal Courts and Nominations
August 15, 2022

BLOG: Building the Next Generation of Constitutional Progressives

This summer, CAC welcomed four interns to learn our method of understanding the progressive promise...
Federal Courts and Nominations
August 6, 2022

Bloomberg
The seeds of the US Supreme Court’s recent rulings on guns and abortion lie in...
By: Elizabeth B. Wydra, By Greg Stohr
Federal Courts and Nominations
July 28, 2022

How the Supreme Court’s “fauxriginalists” are warping the Constitution

Salon
...The truth is that so-called modern originalists or textualists, like the late Justice Antonin Scalia...
By: Praveen Fernandes, By Kirk Swearingen
Federal Courts and Nominations
July 14, 2022