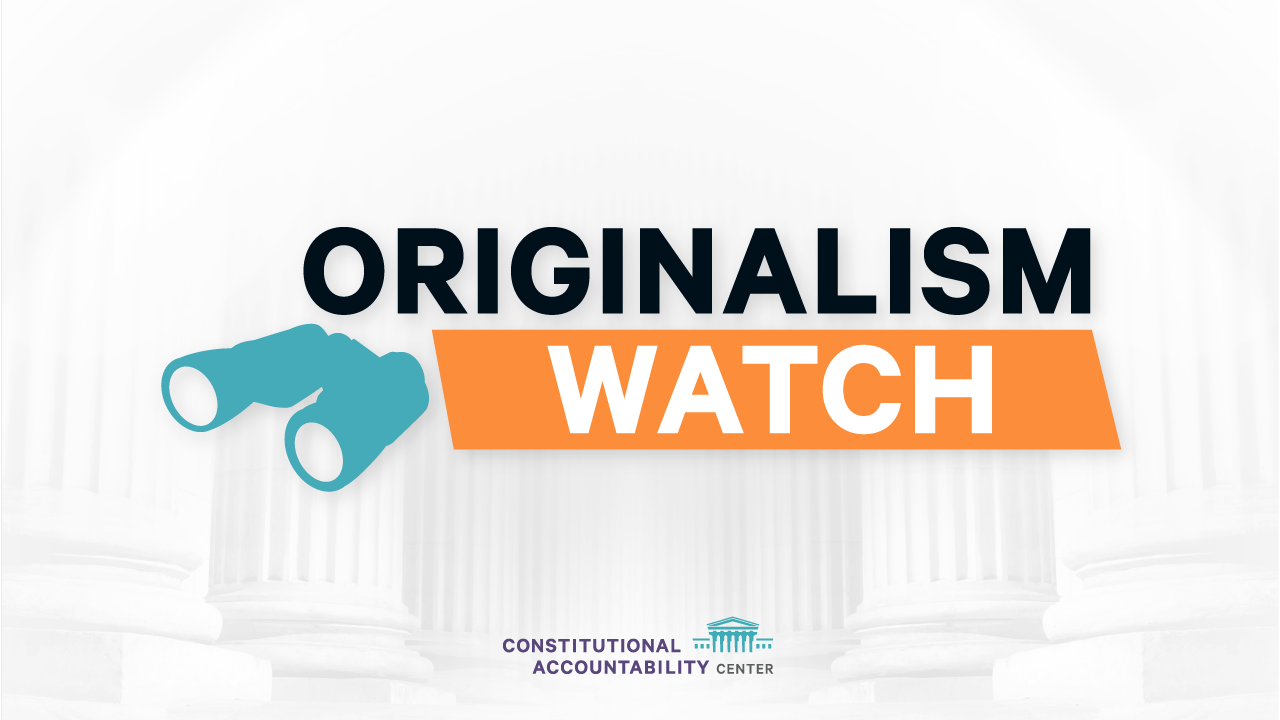 The federal courts, from the Supreme Court on down, are packed with conservative jurists who claim to be faithful to the Constitution’s text and history.  But all too often conservative judges who tout their originalist credentials practice a selective form of originalism that consistently turns a blind eye to the Constitution’s amendments that guarantee fundamental rights, mandate equal protection, and broadly secure equal citizenship.  Much of the time they practice what we at CAC call fauxriginalism.

A textbook illustration of this comes from the Sixth Circuit’s recent 9-7 ruling in Preterm Cleveland v. McCloud, in which a sharply divided en banc Sixth Circuit upheld an Ohio law that prohibited physicians from performing an abortion if the patient sought to obtain an abortion because the fetus had been diagnosed with Downs Syndrome.  The majority upheld the statute, flouting binding Supreme Court precedent that holds that states may not deprive individuals of the decision whether to terminate a pregnancy prior to fetal viability.  Judge John Bush, who was appointed to the bench by President Donald Trump, went further, suggesting bans on abortions were consistent with the text and history of the Fourteenth Amendment.  Judge Bush’s concurring opinion sought to offer an originalist theory, the logic of which would lead to overturning nearly fifty years of Supreme Court precedent protecting the constitutional right to choose abortion.

Judge Bush’s opinion suffers from at least one small problem and one big problem.  The small problem is that some of the scholars cited by Judge Bush have already pushed back on his opinion, suggesting Judge Bush misread the work he cited.  The big problem is that the historical record is overwhelmingly contrary to the conclusion he reached in his opinion: in fact, the Fourteenth Amendment was designed to ensure that states respected substantive fundamental rights.

There is, of course, room to debate how the Fourteenth Amendment protects fundamental rights.  Quite likely, the Due Process Clause would not have played the role it has but for the fact that the Supreme Court essentially wrote the Privileges or Immunities Clause out of the document just a few years after its ratification.  But what cannot be seriously debated is that the historical record shows that the original meaning of the Fourteenth Amendment protects substantive fundamental rights, including rights of heart and home not found elsewhere in the four corners of the document.  Judge Bush simply ignores this history.

BLOG: How Do We Fix an Ailing Court? Lessons From Reconstruction

The Supreme Court is ailing, but you wouldn’t know it from Chief Justice Roberts’s 2022...
By: David H. Gans
Federal Courts and Nominations
January 15, 2023

How to fix the Supreme Court: Congress has the power, and simply isn’t using it

Salon
Historian David Gans on the lessons of Reconstruction, when Congress enforced reforms on a stubborn...
By: David H. Gans, By Paul Rosenberg
Federal Courts and Nominations
December 26, 2022

Business Insider
On the first day of the Supreme Court term, an attorney was delivering his closing...
By: Elizabeth B. Wydra, by Oma Seddiq
Federal Courts and Nominations
December 26, 2022

Legal Talk Network
Originalism is a type of judicial interpretation of a constitution (especially the U.S. Constitution) that...
By: David H. Gans, J. Craig Williams
Federal Courts and Nominations
December 19, 2022

DORF ON LAW BLOG
This was a no good, terrible, very bad year at the Supreme Court of the...
By: David H. Gans, by Eric Segall