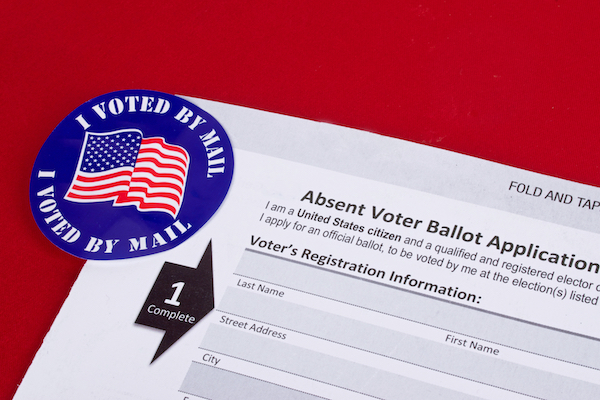 Over the last few months, President Trump has gone on several tirades against the use of mail-in ballots, tweeting that mail-in ballots would lead to “substantial[] fraud[]” and result in a “[r]igged [e]lection.” Despite evidence to the contrary so overwhelming that Twitter even applied fact-checking labels to one of President Trump’s tweets for the first time, Trump has continued to parade this myth. Not only are his claims factually incorrect, they also ignore our country’s long history of using mail-in ballots. Indeed, there is a type of mail-in voting that has been used by the military since the Founding Era, and is still used more broadly today: the absentee ballot.

One of the earliest known instances of absentee voting occurred during the American Revolution. In December 1775, a group of soldiers from the Continental Army sent a letter back to their town asking if their votes could be counted in a local election. And at the town meeting held to discuss the issue, the town agreed to count the votes “as if the men were present themselves.”

There were also some limited examples of absentee voting during the War of 1812. For example, during the war, Pennsylvania allowed soldiers to cast absentee ballots if they were stationed more than two miles from their home; however, this law was ultimately declared unconstitutional in 1862 because under Pennsylvania’s constitution, soliders could only vote in the election districts where they resided when they entered the military, and the law at issue allowed soliders to vote outside of those districts. New Jersey also had a similar law dating back to 1815, but that law was repealed in 1820.

Following these early experiments with the use of absentee ballots, the first major use of absentee ballots occurred during the Civil War. Wisconsin led the way, enacting absentee voting legislation in the lead-up to the 1862 midterm elections. Essentially, Wisconsin’s law allowed army officers to conduct the vote in their camps and then forward the ballots to the governor and the Secretary of State. According to the text of the law, “all qualified [white] electors . . . in the actual military service . . . [are] entitled to exercise the right of suffrage at any general election . . . at the several posts, camps, or places where the regiment or battery of artillery . . . may be.”

Over the course of the war, a number of other states followed Wisconsin’s example, even though Democrats opposed absentee ballots because they believed that soldiers would vote for Republican candidates. For example, the state of Minnesota passed a law allowing soldiers who were part of the service for ten or more days before an election to send ballots to judges in their district. In 1863, Ohio and Vermont passed similar laws, and West Virginia even included a provision regarding soldier suffrage in its constitution. Likewise, in 1864, Pennsylavnia passed a law similar to the law in Wisconsin, though it also allowed servicemen “detached or absent from their companies, or in any military or naval hospital, or in any vessel or naval yard, [to] vote at such polls as may be most convenient.”

By the 1864 presidential election, nineteen Northern states had legislation allowing soldiers to vote away from home, either through polling places in the field or by mailing ballots home. Some soldiers were also allowed to vote by proxy whereby a soldier designated someone at home to cast his vote. By the time the election had concluded, about 150,000 of the 1 million Union soldiers voted absentee. And according to experts, there were no instances of widespread fraud during this time.

After the Civil War ended, the states gradually passed new laws to expand absentee voting to civilians. Between 1911 and 1924, 45 of the 48 states adopted some kind of absentee voting. In some cases, these laws required voters to have a specific reason or “excuse” to vote absentee, such as travel or illness. Today, registered voters can vote absentee in all 50 states, though 16 states still require an “excuse” to do so.

Trump’s repeated efforts to undermine the legitimacy of mail-in ballots is at odds with our country’s long history of using absentee voting by mail. But more importantly, the right to vote is an essential part of our democracy for every citizen in America. Indeed, no right is recognized more times in the Constitution than the right to vote. So if we really want to uphold the values of American democracy, we need to let everyone’s voices be heard, no matter how they plan to vote.

Voice of America
WASHINGTON — When midterm elections get under way next month, voters in several Republican-controlled states will...
By: David H. Gans, by Masood Farivar
Voting Rights and Democracy
October 4, 2022

Bloomberg Law
Justice Ketanji Brown Jackson invoked the original meaning of the US Constitution in her first...
By: David H. Gans, by Kimberly Strawbridge Robinson
Voting Rights and Democracy
October 4, 2022

RELEASE: Thanks to Justice Jackson, Progressive Originalism Emerged at the Supreme Court This Morning: CAC Reacts to Oral Argument in Alabama Redistricting Case