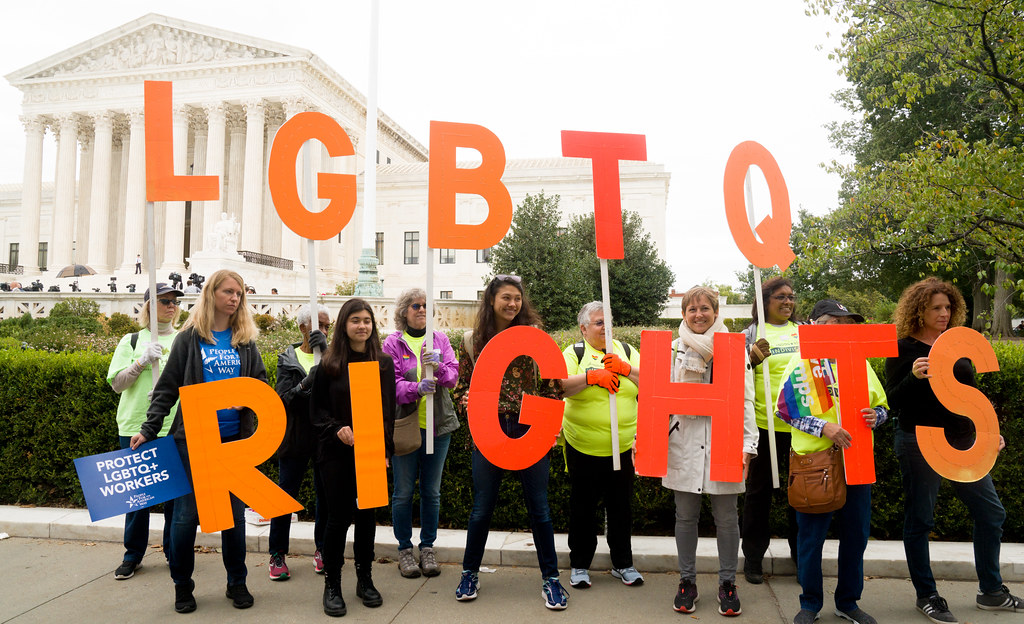 Last week, White House press secretary Kayleigh McEnany was asked if the Trump administration had plans to lift the ban on transgender military service, which President Trump announced via Twitter three years ago this month. Instead of answering the question, McEnany said that Trump “has a great record when it comes to the LGBTQ community.” But as many have pointed out, that is far from the truth. In the three and half years since Trump became President, he and his administration have engaged in countless attacks on the LGBTQ community, including opposing LGBTQ equality in both employment and health care. Here at the Constitutional Accountability Center (CAC), we have been proud to stand against these actions and stand with the LGBTQ community in various ways.

This is deeply troubling because LGBTQ people face enormous discrimination when it comes to healthcare. At the time that the ACA passed, for instance, research showed that a staggering 56 percent of LGB people and 70 percent of transgender and gender non-conforming people had experienced some form of discrimination in health care. And this discrimination continues today, with one recent survey showing that eight percent of LGB individuals and 29 percent of transgender individuals had a doctor or other health care provider refuse to see them in the prior year because of their actual or perceived sexual orientation or gender identity.

CAC, along with the House General Counsel’s Office, recently filed an amicus brief on behalf of the U.S. House of Representatives in support of Whitman-Walker Health and several other LGBTQ clinics who are challenging that new rule. Our brief argues that the Trump administration’s decision to withdraw these anti-discrimination protections for LGBTQ individuals violates the text of the ACA and undermines Congress’s plan to make quality, affordable health care available to all Americans. Specifically, the recent Supreme Court decision in Bostock v. Clayton County, made clear that sexual orientation and gender identity discrimination necessarily involves discrimination on the basis of sex.

The Trump administration’s attacks on the LGBTQ community have not been limited to health care. Last year, for example, in the Bostock case and two accompanying cases, the Trump administration urged the Supreme Court to rule that Title VII —the federal law that prohibits employment discrimination “because of … sex”—does not prohibit discrimination against individuals because of their sexual orientation or gender identity. The Trump administration’s interpretation would have allowed LGBTQ people to be fired or otherwise discriminated against by employers solely on the basis of their sexual orientation or gender identity, which is a huge problem given that a recent survey showed that one in four LGBTQ people have been discriminated against based on their sexual orientation or gender identity in the last year.

CAC, along with Rutgers Law School professor Katie Eyer, filed a brief on behalf of statutory interpretation and equality law scholars arguing that Title VII’s text plainly covers discrimination based on sexual orientation or gender identity because with those kinds of discrimination, sex is always a factor. When an employer fires a woman because she is attracted to women, for instance, but not a man who is attracted to women, that action is necessarily “because of … sex.” Likewise, when an employer fires a transgender woman for identifying and presenting as a woman, that action is necessarily “because of … sex” because the employer would not have fired her for identifying and presenting as a woman if she were assigned the female sex at birth. Fortunately, the Supreme Court agreed with our reasoning and not the Trump Administration’s, holding that if an employer discriminates against an individual because of their sexual orientation or gender identity, that discrimination is inseparable from discrimination based on sex and is therefore prohibited by Title VII.

As mentioned previously, the Trump administration also instituted a ban on transgender individuals serving in the military in 2017. CAC submitted an amicus brief in two lawsuits challenging the ban arguing that it violates the Fifth Amendment, which guarantees equal protection for all and forbids the federal government from enacting policies that single out a class of individuals for disfavored legal status. Second, in our brief, we explained that the government’s justifications for the ban—that it is needed to maintain unit cohesion and military effectiveness—are without merit and have no rational connection to a legitimate government interest. Despite injunctions issued in the lower courts to block the ban from going into effect, in 2019, the Supreme Court issued a stay allowing the ban to go into effect while the lawsuits proceed.

Finally, in Masterpiece Cakeshop, Ltd. v. Colorado Civil Rights Commission, a case involving a same-sex couple that wanted to buy a cake for their wedding from a local bakery, the Trump administration argued that the bakery was not required to abide by the state’s anti-discrimination law, which makes it unlawful for a person to refuse service to an individual based on his or her sexual orientation. In 2017, CAC filed a brief in the Supreme Court on behalf of law professors arguing that the First Amendment does not give—and has never been understood to give—commercial businesses the right to violate generally applicable public accommodations laws that prohibit discrimination. In a narrow ruling, the Supreme Court held that the Colorado Civil Rights Commission had violated the baker’s First Amendment rights under the Free Exercise clause because the Commission did not “give full and fair consideration to [the baker’s] religious objection.” But it thankfully did not adopt the broader proposition that storekeepers can avoid complying with public accommodations laws simply because those laws conflict with their sincerely held religious beliefs.

The Fate of Anti-Discrimination Laws Lies With the Supreme Court

During the October 2020 term, the Supreme Court is set to take up some extremely...
By: Becca Damante
Civil and Human Rights
August 21, 2020

InsideSources
As a woman and constitutional lawyer, I have long held special reverence for the 19th...
By: Elizabeth B. Wydra
Civil and Human Rights
U.S. Supreme Court

In Fulton v. City of Philadelphia, the Supreme Court will consider whether the Free Exercise Clause requires Philadelphia to contract with a private agency to provide foster-parent services even though that agency refuses to comply...
Civil and Human Rights
August 18, 2020

#PurpleChairChat Episode 7: Honoring the 100th Anniversary of the 19th Amendment and Fight for Women’s Equality

RELEASE: “WE DO NOT WANT TO BE HUNTED”

New scholarship explores the right to be secure and our constitutional story of race and...
By: Elizabeth B. Wydra, David H. Gans
Civil and Human Rights
July 18, 2020

WASHINGTON – On news of the passing of Congressman John Lewis, Constitutional Accountability Center President...
By: Elizabeth B. Wydra