Protesters Demand the Protection our Constitution Promises. Courts are Beginning to Listen. 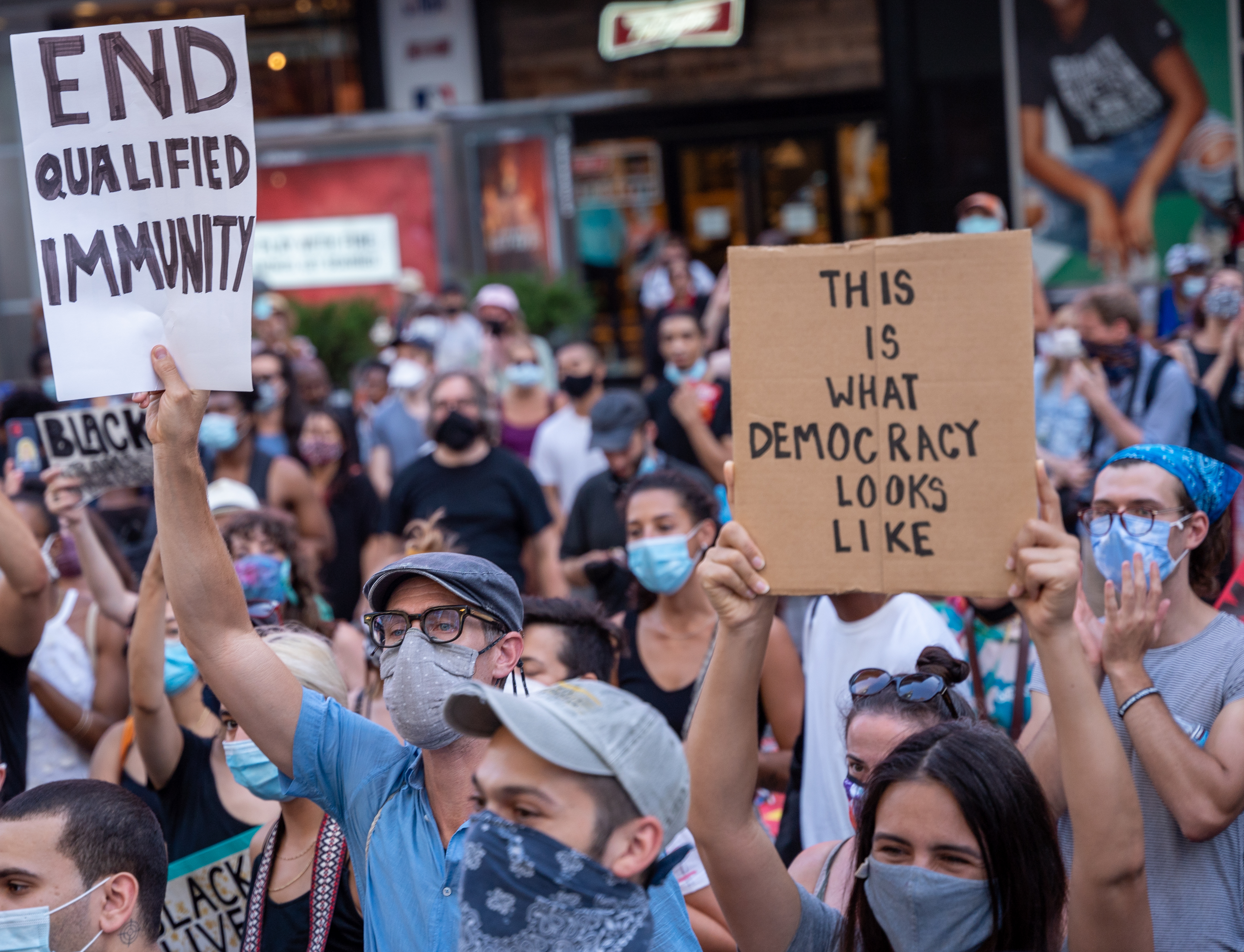 This summer, protesters around the country have demanded that our elected and community leaders pay attention to state-sanctioned violence by police officers and support the Movement for Black Lives.  There is evidence these calls are reaching another audience as well: federal judges, who hear the legal challenges that often result from unconstitutional uses of police force.

Qualified immunity is a legal doctrine the Supreme Court created to shield police officers from civil liability when they violate people’s constitutional rights.  The problem is that there is no historical or legal grounding for this doctrine.  Police abuse of Black citizens was one concern that motivated Congress to pass Section 1983, one of our nation’s major civil rights laws, which provides the victims of unconstitutional state action with a means of seeking recourse in federal court.  While there were certain well-known immunities at the time of Section 1983’s passage that protected some officials from lawsuits, there was nothing like modern-day qualified immunity doctrine.  Indeed, the Court’s current doctrine turns a law that was supposed to ensure accountability into one that often allows police officers to escape accountability when they violate the Constitution.

According to the Supreme Court, police officers—or really, the local governments that usually end up paying any actual money judgments—should not have to compensate people whose constitutional rights were violated if the constitutional right was not “clearly established” at the time of the violation.  Lower courts often interpret the doctrine to require a prior case exactly on point in order to consider the law “clearly established.”  That is because although the Supreme Court has been explicit that “officials can still be on notice that their conduct violates established law even in novel factual circumstances,” the Court frequently reverses lower courts that have declined to give police officers immunity.  The result is that in federal courts throughout the country, an individual usually has no legal recourse unless the courts have previously held that a police officer violated a person’s rights in the exact same way as in the case under consideration.

And to make matters worse, courts can say the constitutional right being asserted was not clearly established, and therefore grant immunity, without actually determining whether the person was indeed entitled to that right.  That means police officers have no incentive to make sure they observe constitutional limits on their actions; the next time the same thing happens, the law is still not clearly established, and another officer is again immune.

The Supreme Court or Congress should get rid of qualified immunity.  But in the meantime, lower courts can act to address the significant problems caused by the doctrine.  As the country increasingly acknowledges that Black communities disproportionately bear the brunt of the constitutional violations committed in the course of policing, some courts do seem to be recognizing that they have the power to ameliorate the burden by denying police officers the free pass of qualified immunity.  Indeed, in some recent cases, courts have explicitly recognized the serious problems posed by police abuses and the important role the Constitution should be playing in stopping those abuses.

For instance, a recent opinion has been lauded for its unflinching description of the reality that many Black Americans face at the hands of law enforcement officers, including “killings by police and police brutality writ large—a problem Black people have endured since states replaced slave patrols with police officers who enforced ‘Black codes.’”  Despite that important recognition, the court nevertheless granted the officer in question qualified immunity for stopping, with no reason, a Black man driving a Mercedes and spending multiple—ultimately fruitless—hours searching his car.  The judge illustrated the dilemma courts face in these scenarios: “the question in this case is whether it was clearly established that an officer who has made five sequential requests for consent to search a car, lied, promised leniency, and placed his arm inside of a person’s car during a traffic stop while awaiting background check results has violated the Fourth Amendment.”  Of course, a court had not previously established a rule speaking to those exact circumstances.

But, as some other courts are starting to recognize, even the Supreme Court’s current qualified immunity doctrine, as misguided as it is, does not require the relevant constitutional violations to be defined in such granular detail.

For instance, in June, the Fourth Circuit refused to grant qualified immunity to “five officers who shot and killed [a man] as he lay on the ground.”  In deciding that, the court properly framed the question as whether it is unconstitutional for police to shoot a person who is “secured or incapacitated.”  The court ended its eminently reasonable opinion by noting that “[a]lthough we recognize that our police officers are often asked to make split-second decisions, we expect them to do so with respect for the dignity and worth of black lives,” and specifically invoked George Floyd’s recent murder at the hands of police.

Although not all qualified immunity decisions this summer have so explicitly engaged with the protests, at least some courts are heeding the call to uphold the promise of the Constitution and hold police officers to reasonable standards.

Just weeks after Mr. Floyd’s death, the Second Circuit overturned a lower court decision that officers could not be liable for killing a Black man who had accidentally tripped an emergency medical alarm system installed in his home.  When armed police officers arrived at his door, the elderly veteran, in fear for his life, refused to let them inside.  Police forced their way in and killed him in the effort.  In examining the case, the court posited questions that reflect protesters’ calls for police to treat all people with care and respect: why did police force their way into the home instead of deescalating the situation?  What was the significance of the “crude epithets” police hurled at the victim before forcing their way into his home?

The Eleventh Circuit likewise recently refused to let police off the hook after they stopped a man with little reason, then paralyzed him while trying to secure and frisk him.  The court emphasized that some cases have facts that demonstrate unconstitutional police action with “obvious clarity”—that some conduct is so obviously unconstitutional that there need not be prior cases with precisely the same circumstances.

Similarly, in June, the Sixth Circuit reversed a lower court’s grant of qualified immunity to police officers on several claims of excessive force and unlawful arrest after the officers approached a Black man during a traffic stop with their guns drawn and tased him when he did not follow police orders.  The court criticized the lower court judge for “using too specific of a level of generality.”  Framing the question at a more reasonable level, the court of appeals asked whether “drawing a weapon on a suspect who was not fleeing or posing a safety risk and tasering a suspect who was not actively resisting arrest constituted excessive force.”

As these examples show, the courts need not allow police officers to flout our Constitution’s safeguards by granting immunity to officers unless the harmful acts they commit have already been held unconstitutional in an identical scenario.  By recognizing that a police officer can violate someone’s “clearly established” constitutional right even if the right hasn’t been previously violated in the exact same way, courts act well within the bounds of existing Supreme Court doctrine on qualified immunity.  They also fully respect the Constitution, the federal law Congress passed to ensure that the Constitution was fully enforced, and the officials who are charged with protecting us all.

LA Times
WASHINGTON —  The Supreme Court on Monday set aside a ruling by a panel of conservative...
By: Brianne J. Gorod, By David G. Savage
Criminal Justice
August 19, 2020

OP-ED: Roberts’ Rules: How the Chief Justice Could Rein in Police Abuse of Power

Take Care
A theme of Chief Justice John Roberts’ opinions this past term is that courts should...
By: David H. Gans
Criminal Justice
July 19, 2020

OP-ED: The 14th Amendment Was Meant to Be a Protection Against State Violence

The Atlantic
On December 3, 1865, a group of Black Mississippians wrote to the state’s governor, demanding respect for...
By: David H. Gans
Criminal Justice
July 23, 2020

“We Do Not Want to be Hunted”: The Right To Be Secure and Our Constitutional Story of Race and Policing

In Edwards v. Vannoy, the Supreme Court is considering whether its decision in Ramos v. Louisiana—guaranteeing criminal defendants in both state and federal court the right to a unanimous jury verdict—applies retroactively to cases on...
Criminal Justice
U.S. Supreme Court

In this case, the Supreme Court is being asked to consider whether, and to what extent, a criminal defendant’s constitutional right to discover potentially exculpatory evidence should trump state statutory privileges that otherwise would otherwise...