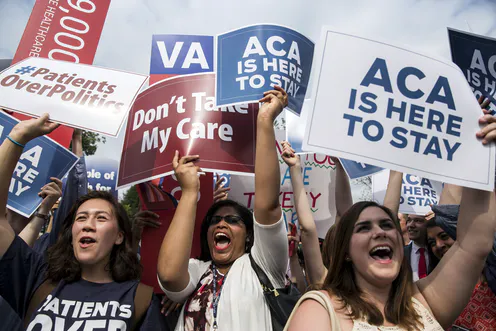 In the midst of the coronavirus pandemic, the Trump administration is continuing its efforts to undermine the Affordable Care Act (ACA) and deny Americans access to quality, affordable health insurance.  Even as almost every state that runs its own exchange has opened a special enrollment period (SEP) to ensure that uninsured individuals can obtain health insurance, the Trump administration has chosen not to do the same for the federal Exchanges.  Last week, the city of Chicago, represented by Democracy Forward, sued the Trump administration, arguing that its failure to open a SEP violates the ACA, and the Constitutional Accountability Center (CAC), along with the House General Counsel’s Office, filed an amicus brief on behalf of the U.S. House of Representatives in support of Chicago.

As our amicus brief explains, the ACA requires the Department of Health and Human Services (HHS) to open “special enrollment periods” outside of annual open enrollment periods after certain triggering events such as job loss, and in other “exceptional circumstances.”  There can be no doubt that the global pandemic is an “exceptional circumstance[].”  The Trump administration’s refusal to open an SEP undermines Congress’s plan in passing the ACA, which was to reduce the number of uninsured Americans and expand health care coverage.

This brief is only the most recent in a long line of briefs CAC has filed in support of the ACA.  In 2010, in the first constitutional challenges to the ACA, CAC filed amicus briefs in both the lower courts and at the Supreme Court explaining why the ACA’s individual mandate and expansion of Medicaid were both constitutional.  In our brief on behalf of a bipartisan group of state legislators, CAC argued, among other things, that the Constitution gives broad power to the federal government to act in circumstances in which a national solution is necessary or preferable.  While the Supreme Court ultimately struck down the law’s Medicaid expansion, it held that the law’s individual mandate was constitutional.

When the next significant existential challenge to the ACA arose—this time in two cases challenging the IRS’s rule confirming that the law’s federal tax credit was available to all financially eligible Americans regardless of whether they purchased insurance on a state-run or federally facilitated Exchange, CAC again played a leading role in defending the law, filing amicus briefs in both the courts of appeals and the Supreme Court on behalf of Members of Congress and state legislatures.  In our brief, we explained why the law’s history made clear that the tax credits would be available to purchasers on all of the exchanges.  In a 6-3 decision, the Supreme Court agreed.

All the while, CAC was continuing to fight for the ACA in other cases as well.  We filed in Burwell v. Hobby Lobby Stores and Zubik v. Burwell, two Supreme Court cases considering whether religious nonprofits and for-profit secular corporations could deny their employees contraceptive coverage under the ACA.  And in the lower courts, we filed in both Hotze v. Burwell and United States House of Representatives v. Price, cases concerning the constitutionality of the individual and employer mandate provisions of the ACA and reimbursements for cost-sharing reductions, respectively.  In those cases, CAC filed amicus briefs on behalf of Members of Congress defending the legality of these provisions.

Our work defending the ACA has become all the more important since President Trump took office because his administration has joined those challenging the ACA in the courts and has attempted to undermine the law in myriad other ways as well.  First and foremost, because the Trump Department of Justice refused to defend the law in a new challenge to the constitutionality of the individual mandate, CAC, along with the General Counsel of the House of Representatives, and the law firm of Munger, Tolles & Olson, filed a motion for the U.S. House of Representatives to intervene in that case.  The Fifth Circuit granted our motion, and we have subsquently submitted briefs in both the Fifth Circuit and the Supreme Court arguing that the individual mandate is constitutional and, even if it is not, that the rest of the law should stand.

Second, we filed an amicus brief in the Supreme Court case, Little Sisters of the Poor v. Trump, a case considering whether the Trump Administration’s decision to exempt not-for-profit, educational, and for-profit employers from the ACA’s contraceptive coverage requirement is lawful.

In sum, CAC has a long history of working to support the ACA.  In doing so, CAC is proud to support Congress’s plan in passing the ACA: making quality, affordable health insurance available to all Americans.

In State of New York v. U.S. Department of Health and Human Services, the District Court for the Southern District of New York is considering whether a Trump Administration rule withdrawing certain nondiscrimination protections in...
Health Care
September 10, 2020

The National Law Journal
More than eight years after successfully defending the constitutionality of the Affordable Care Act, former...
Health Care
U.S. District Court for the Western District of Washington

In Walker v. Azar, the District Court for the Eastern District of New York is considering whether a Trump Administration rule withdrawing certain nondiscrimination protections in health care from LGBTQ people is unlawful.
Health Care
July 12, 2020

The Washington Times
The big win the Supreme Court handed to pro-choice advocates this term is not silencing Democrats who...
By: Elizabeth B. Wydra, By Alex Swoyer
Health Care
U.S. District Court for the District of Columbia

In Whitman-Walker v. U.S. Department of Health and Human Services, the District Court for the District of Columbia is considering whether a Trump Administration rule withdrawing certain nondiscrimination protections in health care from LGBTQ people...