Voter Suppression is Infringing Upon the Fundamental Right to Vote 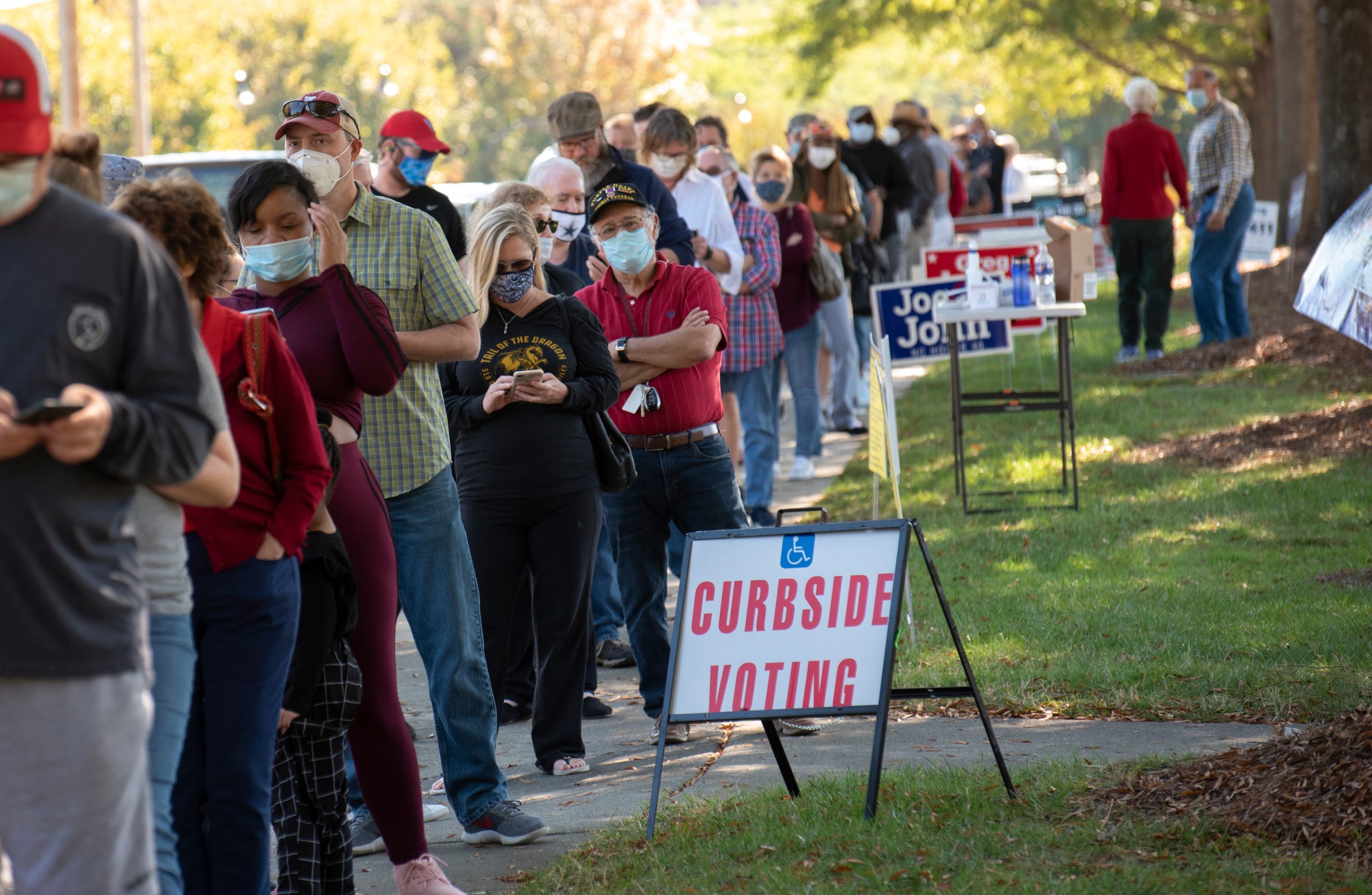 With less than a week before voting in the 2020 election ends, the Trump administration and conservatives are not slowing down in their efforts to suppress the vote—and the Supreme Court is being repeatedly asked to weigh in on the legality of their efforts. Earlier this week, the Supreme Court sided with Wisconsin’s Republican-controlled legislature and ruled that the state need not extend the deadline for receipt of absentee ballots beyond 8 p.m. on election night. Just yesterday, the Court also let stand a 6-day extension for ballots to be received in North Carolina. A similar challenge arising out of Pennsylvania raised the possibility that the Justices might intervene to throw out ballots received after Election Day. But the Court refused to hear the Republican Party of Pennsylvania’s challenge on an expedited basis—thus allowing mail-in ballots postmarked by Election Day to be accepted for counting if received by November 6—but three Justices suggested that Republicans would have a valid basis to challenge the legality of counting those ballots after the election. With other voter suppression efforts happening across the nation, the Court should remember that the right to vote is fundamental, and it is the Court’s responsibility to protect it.

Sadly, voter suppression efforts like those that are occurring now are nothing new, and they take many different forms.  A recent investigation by New York Times Magazine found an “extensive effort [by the Trump administration and the Republican party] to gain partisan advantage by aggressively promoting the false claim that voter fraud is a pervasive problem.” In part, this has manifested by  President Trump spreading the false claim that mail-in ballots lead to voter fraud, despite clear evidence to the contrary and a history of mail-in ballots that precedes the Civil War.

President Trump and his conservative supporters have also encouraged illegal voter intimidation and engaged in surveillance and poll-watching. For example, earlier this year, the New York Times reported that the Republican National Committee invested $20 million in its fight against Democratic initiatives to loosen ballot restrictions and planned to source 50,000 volunteers to monitor the polls during this election cycle. To be sure, poll watching is legal.  But voter intimidation is not.  And that seems to be what President Trump encouraged during the first presidential debate when he both called for his supporters to “go to the polls and watch very carefully” and directed the white supremacist hate group Proud Boys to “stand by.”

This intimidation is not just hypothetical; in fact, The Washington Post has already reported “inappropriate campaigning and possible voter intimidation in at least 14 states.” For instance, Trump supporters recently appeared outside of an early voting location in Fairfax County, Virginia with campaign signs and chants of “four more years.” The incident led the Virginia Attorney General to issue an opinion saying that voter intimidation is illegal under federal and state law. Similarly, in anticipation of potential voter intimidation, Michigan Secretary of State Jocelyn Benson issued a directive to ban people from openly carrying guns at or near polling places, a directive later struck down by a Michigan state court judge. In addition, the Trump campaign itself was found videotaping voters at drop boxes in Philadelphia. Members of the campaign team also attempted to enter a satellite election office to monitor voters with cellphone cameras. These instances of surveillance, along with unfounded allegations of voter fraud, are all part of a larger strategy to “depress turnout, especially by minorities, by fueling anxieties among voters already suspicious of the authorities.”

Many other voter suppression tactics that have been occurring appear to be aimed specifically at communities of color. For example, as The Washington Post columnist Colbert King recently explained, this election cycle, we have witnessed practices that disproportionately affect Black people including “onerous voter-ID and witness-signature laws; changes to the terms and requirements of voter registration; limitations on polling places; curtailed early voting; and the disenfranchisement of people with felony convictions — even after other voters have affirmed their right to vote.” Other tactics that have been used during this election cycle include the Texas Governor’s order that each county in Texas have only one drop box, which left populous and racially diverse places like Harris County with one drop box for the ballots of up to 2.4 million registered voters.

These voter suppression efforts are deeply troubling because, as the text and history of the Constitution demonstrate, voting is a fundamental right that deserves abundant protection. Indeed, there is no right protected by more parts of the Constitution than the right to vote. After the Constitution was ratified, six separate constitutional amendments were adopted that protect access to the ballot. First, in the wake of the Civil War, “We the People” passed the Fifteenth Amendment to ensure that no one would be denied the right to vote because of their race. The Framers of the Fifteenth Amendment characterized this Amendment as a “capstone in the great temple of American freedom” that would “make every citizen equal in rights and privileges.” Similarly, in 1913, the American people ratified the Seventeenth Amendment to establish a popular election for Senators so that Americans could choose the Senators who represent them.

And one hundred years ago this year, the American people ratified the Nineteenth Amendment to ensure that women had access to the ballot box. As my colleague David Gans recently pointed out, in addition to codifying in the Constitution the idea that no one should be denied the right to vote on the basis of sex, the Nineteenth Amendment also cemented the idea that the right to vote was fundamental and gave Congress broad enforcement power to protect the exercise of the right to vote. In addition, in the decades after that, “We the People” once again protected that right by passing the Twenty-Third, Twenty-Fourth, and the Twenty-Sixth Amendments, which allowed citizens of D.C. to vote in the presidential election, outlawed poll taxes, and prohibited age discrimination in voting against citizens eighteen years or older. All six of these Amendments fundamentally changed our system of government, making the right to vote a constitutional guarantee of the highest order, one that needs our protection today.

With only few days until the close of the 2020 election, President Trump and his conservative base are doubling down on their efforts to prevent all Americans from being able to exercise their fundamental right to vote. This effort is utterly at odds with our amended Constitution and represents a threat to our democracy that the Court must take seriously.

Voting Rights and Democracy
U.S. Court of Appeals for the Eleventh Circuit

In Greene v. Raffensperger, the Eleventh Circuit is considering whether Georgia can adjudicate a challenge brought by voters alleging that Representative Marjorie Taylor Greene is not constitutionally qualified to hold office under Section Three of...
Voting Rights and Democracy
May 25, 2022

USA Today
WASHINGTON – The Supreme Court on Monday sided with Texas Sen. Ted Cruz over a federal law that...
By: Miriam Becker-Cohen, By John Fritze
Voting Rights and Democracy
May 24, 2022

WASHINGTON, DC – The U.S. Court of Appeals for the Fourth Circuit today issued a...
By: Praveen Fernandes
Voting Rights and Democracy
May 16, 2022

In Cawthorn v. Circosta, the Fourth Circuit considered whether North Carolina can adjudicate a challenge brought by voters alleging that Representative Madison Cawthorn is not constitutionally qualified to hold office under Section Three of the...
Voting Rights and Democracy
January 19, 2022

WASHINGTON – Following oral argument in FEC v. Ted Cruz for Senate at the Supreme...
By: Elizabeth B. Wydra