A Crisis and an Opportunity

CAC Summer Intern Devontae Torriente’s experience assisting CAC’s Litigation team this past summer was captured in the story “A Crisis and an Opportunity” posted to the University of Pennsylvania Law School Website.

Before Devontae Torriente L’24 became a student at the University of Pennsylvania Carey Law School, he worked as a community organizer for several progressive causes, mostly in and around Washington, D.C. This past summer, Torriente interned with the Constitutional Accountability Center (CAC), a progressive non-profit organization dedicated to the progressive promise of the text and history of the Constitution, including the revolutionary ideals of liberty and equality that the Constitution promised at its inception and has been amended over time to make more real. 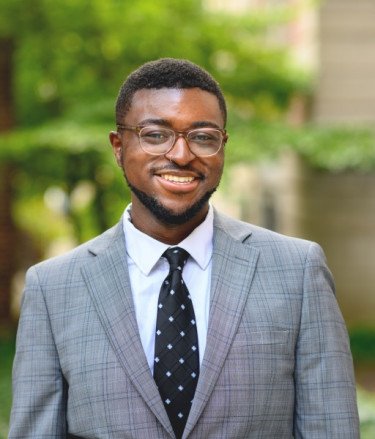 Amidst the Supreme Court’s release of several major decisions that re-tooled constitutional precedent – notably among them, the Dobbs decision, which rewrote the standards for the 14th Amendment’s right to privacy in the context of abortions – Torriente delved into both the contemporary analysis and complex history of the Constitution.

“This is a moment to think deeply about engaging with the law to change it for the better,” said Torriente, who is also a Toll Scholar. “As more things become unsettled, the wider the field becomes for us to push the ball forward on progress. If we are no longer going to be tethered to the traditional way of doing things, it’s an opportunity to center folks who have ideas about the innovative and profound ways that the law can and should work. We must build infrastructure to bring those ideas to fruition and fundamentally restructure how the law works in our lives and in society.”

While assisting CAC advocates in preparing for litigation at both appellate and Supreme Court levels, Torriente examined a range of different substantive issues poised on the cutting edge of contemporary constitutional interpretation. A non-exhaustive list of the topics Torriente researched included: how the anti-commandeering principle applies to the Indian Child Welfare Act; how the First Amendment applies within the context of ensuring LGBTQ+ individuals have equitable access to public accommodations; and how the First Amendment applies to proposed SEC regulations mandating corporate climate change impact disclosures.

“America has not always been welcoming, inclusive, and equitable for all of us, and that is in direct contradiction with many of the propositions put forth by the Framers and Founders throughout American history,” Torriente said. “That tension really forces us to choose: we either want a society where a small group of people maintains social, political, and economic dominance over the rest of us, or we want a society that is about the constitutional freedoms, civil liberties, and rights that allow all of us to thrive.”

Torriente credits his aptitude for critically analyzing questions of constitutional law and legal philosophy in part to the constitutional law course he completed just before the internship began. Not only did his class engage with the doctrine, but Torriente recalled engaging with broader questions, such as who should be the final arbiter of different matters and what trends in justices’ voting records tended to reveal about the case’s merits and about the moment in history more generally.

Torriente emphasized that the many aspects of America’s history that contradict the textual promises of freedom, liberty, and equality should not be ignored, but instead carefully considered and confronted.

Drawing on his background as an organizer, Torriente noted that historians often predict that periods of progress tend to be followed by periods of regression. In Torriente’s opinion, being aware of these cycles and of the role that the law — and lawyers — play within them is crucial for the continued realization of the Constitution’s original, progressive promise.

“What really grounded me in doing this work was remembering that the overarching narrative and idea of the Constitution is itself a progressive one. The Constitution is imperfect in many respects, but it was a remarkable shift in how governments and societies were thinking about governing themselves. The Constitution and American history more broadly show that America, very early on, was thinking about how to create a society centered on rights and liberties,” Torriente said. “The moment we’re in is both a crisis and an opportunity rooted in that history. We have to rise to the occasion to actually ensure justice for all; it’s not just going to happen itself.”

When he returns to class in the fall, Torriente plans to continue to return to one central question: how can an area of law be restructured to ensure that it is doing good in people’s lives and enabling everyone, no matter their background or identity, to thrive?

“The law is fundamentally a system on which all of our lives depend, but so few people have access to it and know how to navigate it,” Torriente said. “As someone who is learning to navigate and speak the language of the law, I view it as my responsibility to make sure that the law is serving everyone. I will be asking that question [of how the law can be more equitably restructured] in every class I take, every pro bono activity I do, every extracurricular I participate in, and every conversation I have with peers and professors on campus.”

Torriente takes a deliberate approach to building a meaningful career; instead of setting goals far off into the future, Torriente prefers to explore his career options as they unfold by mindfully “taking the next right step” at each interval.

In addition to the skills he honed this summer, Torriente also places a high value on the connections he made in D.C. and with his innovative colleagues at CAC. He encourages others who are also seeking to cultivate public interest careers not to be afraid to ask questions and build networks among folks in the field who are already doing interesting and impactful work.

“My approach to building any career is to talk to anyone who will listen about the work that I want to do and my role in society,” Torriente said.

Business Insider
One of the lawmakers who constructed the law President Joe Biden is using to cancel...
By: Smita Ghosh, by Ayelet Sheffey
Access to Justice
U.S. Supreme Court

In Santos Zacaria v. Garland, the Supreme Court is considering whether the exhaustion requirement of 8 U.S.C § 1252(d)(1) is jurisdictional.
Access to Justice
U.S. Court of Appeals for the Fifth Circuit

In Austin v. City of Pasadena, the United States Court of Appeals for the Fifth Circuit is considering whether qualified immunity protects jail officers from being sued for using excessive force after they repeatedly tased...
Access to Justice
September 15, 2022

CAC’s September 2022 Newsletter: Honoring the Constitution in a Time of Challenge

Access to Justice
U.S. Court of Appeals for the Seventh Circuit

In Ortiz v. Foxx, the U.S. Court of Appeals for the Seventh Circuit is considering whether state court judges who administer and enforce Illinois’s name-change statute are subject to suit by a group of transgender...
Access to Justice
June 29, 2022