SCOTUS Weighs in on the Diversity of Media Ownership 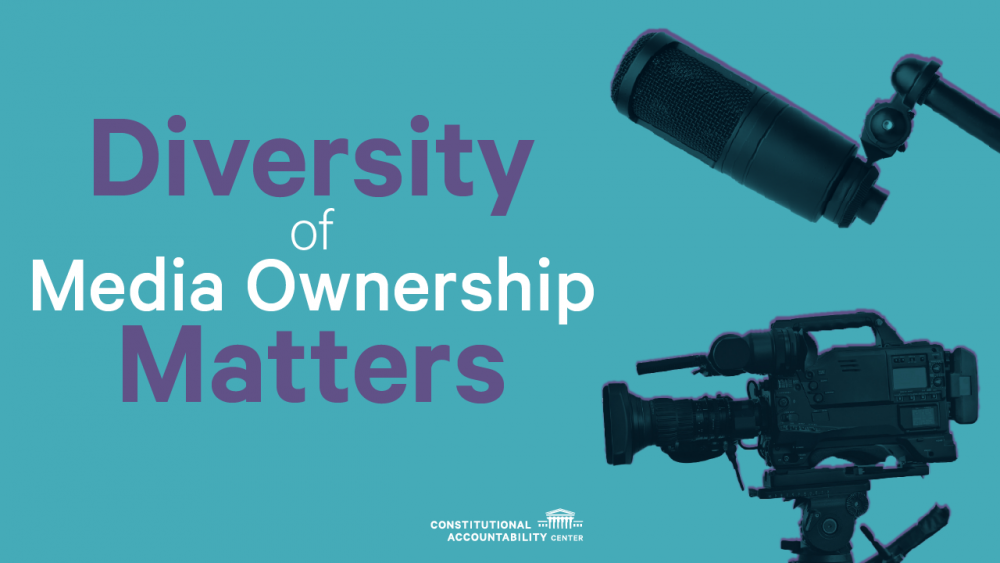 During this term, the Supreme Court is considering two consolidated cases, FCC v. Prometheus Radio Project and National Association of Broadcasters v. Prometheus Radio Project, which concern whether the Federal Communications Commission (FCC) adequately considered the effects that certain regulation changes would have on minority and female ownership of broadcast media. As misinformation now runs wild through our nation’s information ecosystem, it is worth noting that this case could have far-reaching consequences when it comes to both civic engagement and the diversity of media ownership and programming.

One of the largest questions in this case is whether the FCC adequately considered the effect its rule changes would have on the diversity in media ownership. And right now, the statistics on diversity in media ownership are abysmal. According to FCC data collected by The Leadership Conference, there are huge disparities in media ownership, and the Leadership Conference acknowledges that even the FCC’s data understates the problem. The statistics on full power television, or the channels that most people see, as opposed to low power television, which is intended for local broadcasting in small communities, are telling. For example, the FCC’s most recent statistics show that in 2017, women owned 5.3 percent of full power commercial television, despite making up 50.8 percent of the U.S. population. Likewise, in 2017, African Americans owned 0.9% of full power commercial television, even though they made up 13.9% of the U.S. population.

These disparities have huge implications when it comes to diverse programming and representation. Indeed, several studies have shown that diversity in media ownership leads to program diversity and minority-oriented programming. For example, one study recently cited in testimony submitted to the House Subcommittee of Communications & Technology  found “empirical evidence of a link between race or ethnicity of broadcast station owners and contribution to diversity of news and public affairs programming across the broadcast spectrum.”

Diversity in media ownership has also been found to improve civic engagement and voter turnout. For instance, several scholars, including Felix Oberholzer-Gee and Joel Waldfogel, found higher voting rates in minority communities when the radio station owners were of the same ethnicity as their listeners.

Experts have been ringing the alarm about the effects of lackluster media diversity for years. A decade ago, during a workshop on diversity issues held at the FCC, Dr. Carolyn Byerly of Howard University’s journalism department pointed out that the extremely low ownership rates for women and people of color in broadcast media “say quite loudly that the nation is faced with both a women’s rights and civil rights crisis in policy.” She went on to say that “[t]he media today do not and cannot serve the public interest as long as this skewed media ownership pattern continues.”

Here at the Constitutional Accountability Center, we filed a brief arguing that the FCC needs to consider the effects that certain regulation changes would have on minority and female ownership of broadcast media. Under the Telecommunications Act of 1996, every four years, the FCC is required to review its rules governing broadcast media ownership and determine whether those rules “are necessary in the public interest.” If the FCC determines that rules are “no longer in the public interest,” they are required to modify or repeal those regulations.

Our brief makes two main points. First, both the Supreme Court and Congress have long recognized the importance of broadcast media to American public discourse and that maintaining diversity in broadcast media ownership is essential to serving the public interest. For example, as early as the 1920s, members of Congress recognized that if broadcast ownership were “placed in the hands of one,” it would make it more difficult for “those who dare to differ with them” to share their viewpoints. Similarly, the Supreme Court has consistently found that “the widest possible dissemination of information from diverse and antagonistic sources is essential to the welfare of the public.”

In addition, our brief also explains that the text, structure, and history of the Telecommunications Act require the FCC to meaningfully consider ownership diversity when repealing or modifying its regulations. Furthermore, debates around the passage of the Telecommunications Act indicate that in passing the Act Congress maintained its preexisting commitment to ownership diversity, including ownership by minorities and women.

Corporate America had a dominating success rate at the Court this term, with the U.S....
By: Brian R. Frazelle, Elizabeth B. Wydra
Corporate Accountability
July 11, 2022

A Quiet Year for Business at the Supreme Court, with One Huge Exception | 2021-2022 Term

At the end of an otherwise routine year on the Court’s corporate docket, a conservative...
By: Brian R. Frazelle
Corporate Accountability
July 1, 2021

Corporate America had a dominating success rate at the Court this term, with the U.S....
By: Elizabeth B. Wydra, Brian R. Frazelle
Corporate Accountability
June 17, 2021

Supreme Court hints FHFA’s Calabria could keep job after all