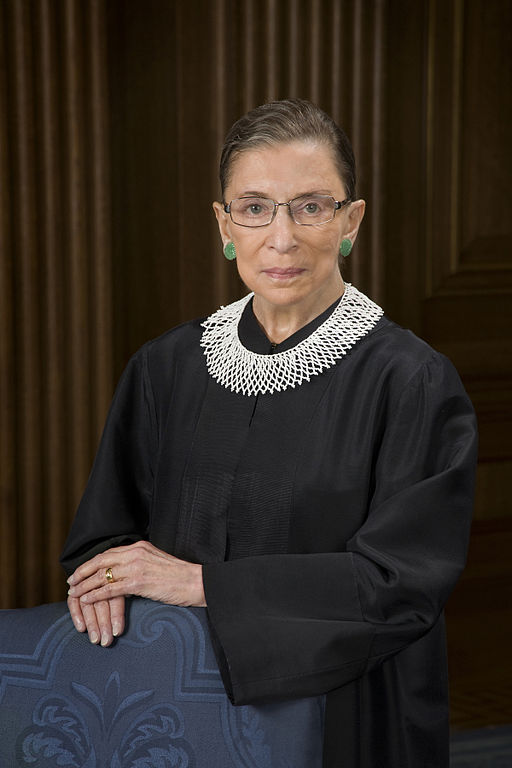 Hundreds of lawyers, scholars, students, and members of the public recently gathered for an event hosted by Georgetown University Law Center to hear U.S. Supreme Court Justice Ruth Bader Ginsburg reflect on her life and career. The event, which stemmed from an idea by Constitutional Accountability Center (CAC) President Elizabeth Wydra, was intended to discuss Justice Ginsburg’s legacy of gender equality work.

In a conversation moderated by Justice Ginsburg’s former law clerks—Ruthanne Deutsch of Deutsch Hunt PLLC and Dori Bernstein of Georgetown’s Supreme Court Institute—Justice Ginsburg delivered wisdom for life inside and outside of the courtroom. She also shared her thoughts about working toward the equality promised by the Constitution.

Prior to the women’s rights movement of the 1960’s and 1970’s, the talents and abilities of so many women had few opportunities for expression outside the home. For Ginsburg, having ambitious career goals while maintaining a family was a difficult but worthwhile struggle. In her conversation with her former law clerks, she reflected on work-life balance and on why she thought it was as important for men as for women.

“So many men wake up one day and the child has grown and they’ve had very little to do with raising their child and they regret it,” she said. “The years that you will spend after your child has left the nest are much longer and if you’ve lost out on the opportunity to be a part of their child raising to form a bond with your child you’re really missing something important in life.”

Ginsburg attributes “luck” to her meeting her husband and life partner Martin “Marty” Ginsburg. She acknowledges the fact he was one of the first men to value her intelligence. It was also her husband who encouraged her to push further in her career pursuits. The couple lived the gender equality values Ginsburg fought for in her professional life, sharing household and childcare duties.

Emphasizing how important sex equality is and how it benefits not only women, but society more broadly, Judge Pillard said, “She isn’t necessarily a women’s rights advocate or champion or jurist, she’s really someone who stands for sex equality or gender equality.” Goss Graves spoke of her admiration for Ginsburg, “being able to challenge the notions that were embedded in our culture, that were [also] so explicitly in our law.”

Ginsburg made it clear that finishing law school and finding gainful employment as a woman in that era were two separate challenges. Ginsburg reflected upon the difficulty that she and Justice Sandra Day O’Connor faced to even secure a job interview, let alone a job offer, after graduating from law school with stellar academic records. She recognized her struggle to find a job was a plight almost all female students faced after law school. Additionally, being the mother of a small child was another reason employers used to deny women jobs due to the cultural norm that fathers shouldn’t be disturbed from work, while mothers needed to be present at home. It was one of Ginsburg’s professors at Columbia who dedicated himself to helping her find a job with some aggressive search tactics. Perseverance as well as support from friends and family helped to propel her in her career.

“Think of what our lives would have been if there were no discrimination…we had to find another way,” Ginsburg said, quoting Justice O’Connor.

“The idea that she came to the court with a plaintiff who might be someone that the justices then—all men of course—could identify with is really smart as a litigator,” Wydra said. “I think she drew inspiration from the civil rights movement that came before her. The idea of trying to find a place where even when you are not represented on the Court, you can find some means of commonality.”

Wydra made this point and emphasized how telling it was that this discussion was occurring on the birthday of Justice Thurgood Marshall, someone whose before-the-bench life as a movement litigator, who secured pathbreaking Supreme Court decisions, would be echoed in Ginsburg’s own trajectory.

The panel also highlighted how Ginsburg’s use of language has been used to challenge the law.

“She can use language to make things real for people, even when it’s difficult questions of the law,” Wydra said.

Professor Gibson added, “There is a posture of dissent that runs throughout her arguments for gender equality as she confronts the deep exclusions that live in the language of the law. She’s used this lesson throughout her career to challenge rhetorical conventions that narrow legal imagination and move the court to see the law from a broader vantage point.”

#PurpleChairChat Episode 4: Free Speech and Equality in the Digital Age

RELEASE: NEW ISSUE BRIEF: Speech and Its Relationship to Equality: Constitutional Values in the Digital Age

“When confronting lies, hate, and harmful propaganda online—which we can expect to reach a fever...
By: David H. Gans
Civil and Human Rights
May 21, 2020

ISSUE BRIEF: Speech and Its Relationship to Equality: Constitutional Values in the Digital Age

Understanding the constitutional duty to strike a balance between speech and equality can help inform...
By: David H. Gans
Civil and Human Rights
April 8, 2020

The Contraceptive Mandate Returns to the Court for a Third Time

In Little Sisters of the Poor v. Pennsylvania and Trump v. Pennsylvania, the Supreme Court is considering whether agency rules, which provide an unconditional religious exemption from the Affordable Care Act’s contraceptive coverage requirement to not-for-profit,...
Civil and Human Rights
February 29, 2020

The Hill
Measures like Louisiana’s are simply “arbitrary ways to make it harder for patients to obtain...
By: David H. Gans, By John Kruzel