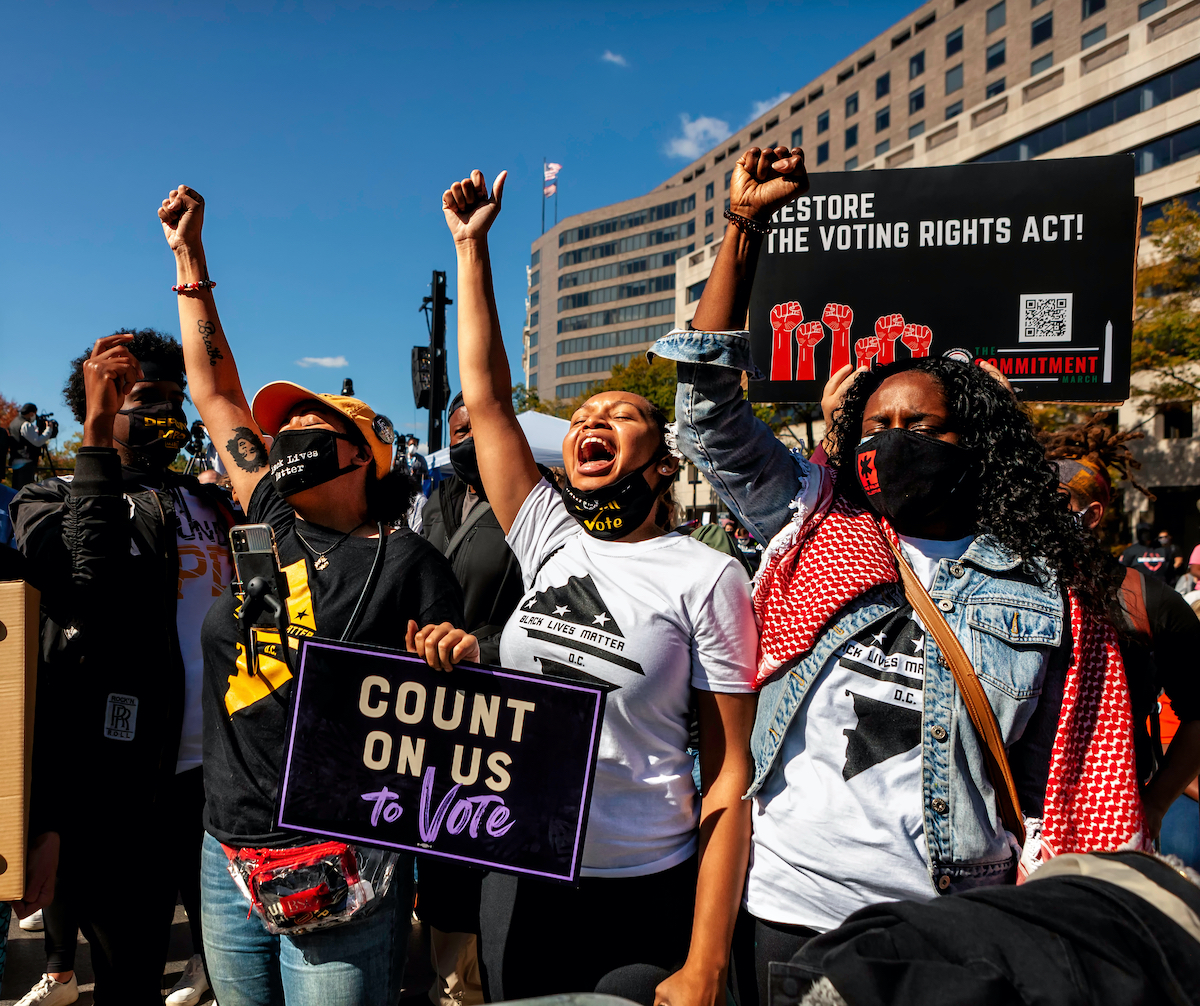 This term the Supreme Court is considering Brnovich v. Democratic National Committee, a case concerning whether Arizona’s prohibitions on out-of-precinct voting and third-party ballot collection practices violate the Voting Rights Act (VRA). Efforts like these that suppress the vote are not unique to Arizona. Given the horrific voter suppression tactics employed during the 2020 Presidential election and the more than 250 bills already introduced in 2021 to restrict the vote, voter suppression will likely be an issue in the courts for years to come. Here at the Constitutional Accountability Center (CAC), we are proud to have a long history of protecting the right to vote, which is one of the most important rights in our amended Constitution.

Most recently, CAC filed an amicus brief in Brnovich, where we urged the Supreme Court to uphold the Ninth Circuit’s ruling that Arizona’s prohibitions on out-of-precinct voting and third-party ballot collection practices violate Section 2 of the VRA. Section 2 of the VRA contains a “results test,” which prohibits states from imposing election rules and practices that “result[] in a denial or abridgement of the right of any citizen of the United States to vote on account of race or color.”

As our amicus brief demonstrates, the text and history of the Fifteenth Amendment gives Congress broad power to stamp out every conceivable attempt by the states to deny or abridge the right to vote on account of race. The “results” test contained in Section 2 of the VRA is thus within the scope of Congress’s express authority to enforce the Fifteenth Amendment and prohibits the enforcement of the Arizona laws at issue.  By invalidating laws that result in a denial of equal political opportunity and perpetuate past voting discrimination, the Act helps address the racial discrimination that concerned the Framers of the Fifteenth Amendment, even when discriminatory intent might be difficult to prove.

This brief is only the most recent in a long line of briefs CAC has filed to protect voting rights. For instance, CAC filed amicus briefs at every stage of the litigation in Shelby County v. Holder, a case involving Section 5 of the VRA, which requires jurisdictions that have a history of engaging in racial discrimination in voting to obtain federal permission or “pre-clearance” before altering their voting laws. In our brief filed on behalf of CAC and constitutional law scholars, CAC used the text and history of the Reconstruction Amendments to argue that Congress enjoys broad authority to protect against racial discrimination in voting and thus the pre-clearance requirement of the VRA was constitutional. Unfortunately, the Supreme Court invalidated the coverage formula contained in Section 4 of the VRA, and Justice Thomas went even further, writing a concurring opinion that took the position that Section 5 itself was unconstitutional. The Court’s opinion immediately “opened the floodgates to laws restricting voting throughout the United States.”

As states enacted discriminatory voting laws enabled by Shelby County, CAC continued to file in voting rights cases, many of which involved the scope of the VRA’s “results test.” For example, in Ohio Democratic Party v. Husted, CAC filed a brief on Ohio’s S.B. 238, which eliminated Ohio’s “Golden Week,” a five-day period during which voters were able to register and vote on the same day at the beginning of early in-person voting. In our brief, we argued that S.B. 238 violated the VRA and the Fourteenth Amendment because the legislation imposed a discriminatory burden on racial minorities.

Unfortunately, the Sixth Circuit ultimately upheld the legislation, allowing for the elimination of “Golden Week” and continued voter suppression. But as the dissent rightly noted, because “S.B. 238 imposes a disproportionate burden on African Americans, and . . . the law was linked to social and historical conditions of discrimination that diminish the ability of African Americans to participate in the political process . . . S.B. 238 has a discriminatory effect in violation of Section 2 of the Voting Rights Act.”

In addition, CAC has filed several briefs in cases challenging voter ID laws that require voters to have either a photo ID from a limited list of acceptable IDs or a difficult-to-obtain state-issued voter ID card. For example, in North Carolina State Conference of the NAACP v. McCrory and Veasey v. Abbott, CAC filed briefs arguing that voter ID laws in North Carolina and Texas violated Section 2 of the VRA because these laws imposed arbitrary and discriminatory burdens on minority voters, impeding their ability to vote. In both cases, the discriminatory laws were struck down, although the plaintiffs only received narrow relief in Veasey.

As the nation looks ahead to upcoming elections at the state and federal levels, efforts to prevent people of color from exercising their constitutionally protected right to vote are already underway. When the Supreme Court hears Brnovich in early March, we can only hope that the Court relies on the text and history of the VRA and the Fifteenth Amendment to protect one of our most sacred rights: the right of every citizen, no matter their race, to vote in our elections.

Voice of America
WASHINGTON — When midterm elections get under way next month, voters in several Republican-controlled states will...
By: David H. Gans, by Masood Farivar
Voting Rights and Democracy
October 4, 2022

Bloomberg Law
Justice Ketanji Brown Jackson invoked the original meaning of the US Constitution in her first...
By: David H. Gans, by Kimberly Strawbridge Robinson
Voting Rights and Democracy
October 4, 2022

RELEASE: Thanks to Justice Jackson, Progressive Originalism Emerged at the Supreme Court This Morning: CAC Reacts to Oral Argument in Alabama Redistricting Case