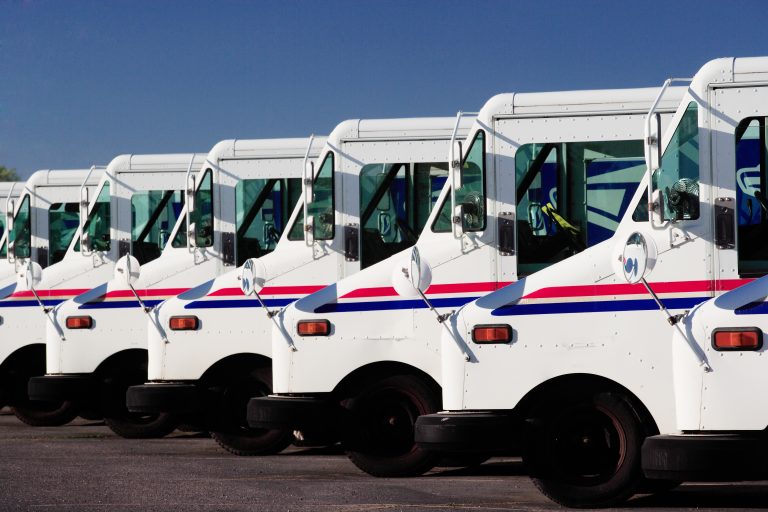 In the weeks since the coronavirus (COVID-19) pandemic hit the United States, President Trump has waged war on one of our nation’s oldest institutions: the United States Postal Service (USPS). For example, earlier this month, the President threatened to veto a coronavirus relief package if it included emergency funding for USPS. And this is not the first time the President has attacked this important federal institution; he has also called the Post Office Amazon’s “Delivery Boy” and accused USPS of becoming “dumber and poorer.” Trump’s attacks come at a time when we need the Post Office most—our ability to hold elections in November and to fulfill our constitutional obligation to hold a national census depends on it.

The Post Office has a long history dating back to the founding era.  It is one of a handful of institutions that is directly mentioned in the Constitution’s text.  Although our national charter left many details to be filled in, the Framers recognized that a postal system would be essential to unify the nation and encourage the spread of ideas across distant states.

Article I, Section 8 authorizes Congress “[t]o establish Post Offices and post Roads.” In The Federalist No. 42, James Madison explained: “The power of establishing post roads must, in every view, be a harmless power, and may, perhaps, by judicious management, become productive of great public conveniency. Nothing which tends to facilitate the intercourse between the States can be deemed unworthy of the public care.”

This important constitutional power did not stay dormant. Just a few years after the Constitution’s ratification, Congress enacted the first substantive federal postal law. This 1792 law established a “general post-office” with “one Postmaster General, who . . . shall provide for carrying the mail of the United States.” The law also established post roads, allowed the Postmaster General to enter into contracts, established postage rates, and set penalties for “neglecting, detaining, delaying, or secreting letters.” Most importantly, the law subsidized newspaper circulation and allowed for the distribution of newspapers across the country. Notably, scholars have said that this “forged a communications revolution just as far-reaching as the later telegraph and internet revolutions.” Indeed, that is true, as the post office created a central communications system that allowed for a robust exchange of ideas, something that is core to our democracy.  As Alexis de Tocqueville aptly commented in his famous study of American democracy, the post office was a “great link between minds.”

As the United States continued to develop, USPS made changes to the postal system to ensure that the post office was accessible to everyone, no matter where they lived or how much money they had. For example, in the 1840s, after a study from a congressionally appointed Postal Commission found that mail was an essential tool for democracy, Congress altered the postage scale to be based on weight, which greatly reduced the cost of postage stamps. Around the same time, Congress also enacted laws to preserve the postal monopoly in cities in order to protect the rural cross-subsidy. At the turn of the twentieth century, Congress also appropriated money to authorize “rural free delivery,” which expanded postal routes across 28 states and ensured free delivery for those in rural areas, and still exists today. Trump’s attacks on the Post Office harm urban and rural dwellers alike.

The U.S. postal system has contributed to some of our most important debates about free speech in a democratic society. During the nineteenth century, abolitionists used the mail to circulate newspapers, books, and pamphlets in an effort “to show the horrors of the institution [of slavery,] . . .  to develop sentiment against it . . .  [and] to arouse the people to a realization of the evils of the institution.” In addition, the principles of the American Anti-Slavery Society specifically stated that it would “circulate unsparingly and extensively Anti-Slavery tracts and periodicals,” and William Lloyd Garrison, editor of the abolitionist paper, the Liberator, raised money to “provide for gratuitous distribution of anti-slavery publications” through the postal system.

The slave states in the South fought back by seeking to suppress abolitionist speech. In Maryland, for example, the legislature passed a law making it illegal for anyone to print or circulate material that could create discontent among enslaved persons. This proved the truth of Frederick Douglass’s charge that “[s]lavery cannot tolerate free speech.” With little to no communications technology at the time, the postal system made an extensive debate over slavery possible. The fight over censorship of the mails marks a key chapter in our First Amendment story and helped to crystalize the importance of protecting dissent in a democratic society.

Today, the post office is as important as ever in maintaining our democracy. One in six Americans live in states that do not permit online voter registration. In light of COVID-19, citizens residing in these states need a functioning post office if they are to have a chance to exercise their fundamental right to vote without endangering health. Come November, millions of Americans hope to vote by mail. Given the ongoing public health crisis, these Americans do not want to sacrifice their health to enjoy their right to vote. While the President has gone on several tirades against mail-in ballots due to their potential for fraud, that claim is wholly without merit, and is just another attempt by the administration to suppress the vote and harm our democracy. We cannot forget what happened just recently in Wisconsin, when voters, primarily in communities of color, were forced to brave long lines and huge crowds, and put their health at risk, in order to exercise their right to vote.

Just as we prepare for a crucial vote, the nation is also conducting the Census, the constitutionally mandated count of all persons that sets the framework for our democracy for the next decade. In 2020, the Census can be filled out online for the first in history. But for those without ready access to a computer or the internet, Census forms need to be mailed, as they have been for decades. Without a functional post office, the Census count could be badly skewed. This would lock into place unequal representation and unequal allocation of federal resources for the next ten years.

Throughout our history, the Post Office has been a “great link between minds.” Now, we need it more than ever for the sake of our democracy. If the history of the post office makes anything clear, it’s that the postal service must be preserved in order to safeguard some of our most basic democratic freedoms, if not our democracy itself.

In Biden v. Nebraska, the Supreme Court is considering whether to allow the Biden Administration’s student debt-relief program to go into effect.
Rule of Law
November 22, 2022

RELEASE: With Supreme Court Action, Trump Tax Records Should Be Turned Over to House Ways and Means Committee Without Delay

Slate
Moore v. Harper, which will be argued before the Supreme Court on December 7, has...
By: David H. Gans
Rule of Law
U.S. Supreme Court

In Moore v. Harper, the Supreme Court is considering whether the Elections Clause prevents a state court from enforcing voting rights guarantees enshrined in a state constitution to limit a state legislature’s regulation of congressional...